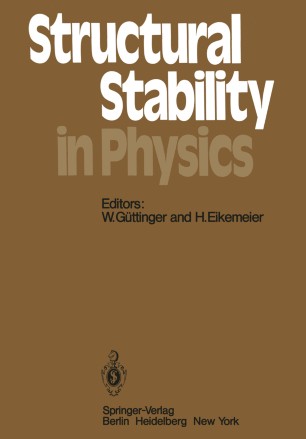 Proceedings of Two International Symposia on Applications of Catastrophe Theory and Topological Concepts in Physics Tübingen, Fed. Rep. of Germany, May 2–6 and December 11–14, 1978

This volume is the record and product of two International Symposia on the Appli­ cation of Catastrophe Theory and Topological Concepts in Physics, held in May and December 1978 at the Institute for Information Sciences, University of TUbingen. The May Symposium centered around the conferral of an honorary doctorate upon Professor Rene Thom, Paris, by the Faculty of Physics of the University of TUbingen in recognition of his discovery of universal structure principles and the new di­ mension he has added to scientific knowledge by his pioneering work on structural stability and morphogenesis. Owing to the broad scope and rapid development of the field, the May Sympos,ium was followed in December by a second one on the same sub­ jects. The symposia, attended by more than 50 scientists, brought together mathe­ maticians, physicists, chemists and biologists to exchange ideas about the recent faSCinating impact of topological concepts on the physical sciences, and also to introduce young scientists to the field. The contributions, covering a wide spectrum, are summarized in the subsequent Introduction. The primary support of the Symposia was provided by the "Vereinigung der Freunde der Univertat TUbingen" (Association of the Benefactors of the University). We are particularly indebted to Dr. H. Doerner for his personal engagement and efficient help with the projects, both in his capacity as Secretary of the Association and as Administrative Director of the University.