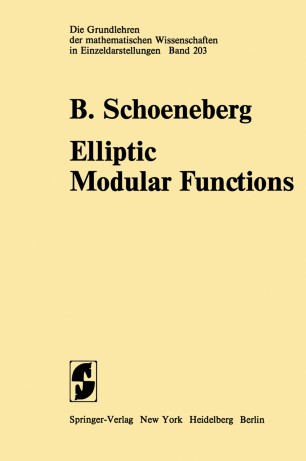 This book is a fully detailed introduction to the theory of modular functions of a single variable. I hope that it will fill gaps which in view ofthe lively development ofthis theory have often been an obstacle to the students' progress. The study of the book requires an elementary knowledge of algebra, number theory and topology and a deeper knowledge of the theory of functions. An extensive discussion of the modular group SL(2, Z) is followed by the introduction to the theory of automorphic functions and auto­ morphic forms of integral dimensions belonging to SL(2,Z). The theory is developed first via the Riemann mapping theorem and then again with the help of Eisenstein series. An investigation of the subgroups of SL(2, Z) and the introduction of automorphic functions and forms belonging to these groups folIows. Special attention is given to the subgroups of finite index in SL (2, Z) and, among these, to the so-called congruence groups. The decisive role in this setting is assumed by the Riemann-Roch theorem. Since its proof may be found in the literature, only the pertinent basic concepts are outlined. For the extension of the theory, special fields of modular functions­ in particular the transformation fields of order n-are studied. Eisen­ stein series of higher level are introduced which, in case of the dimension - 2, allow the construction of integrals of the 3 rd kind. The properties of these integrals are discussed at length.