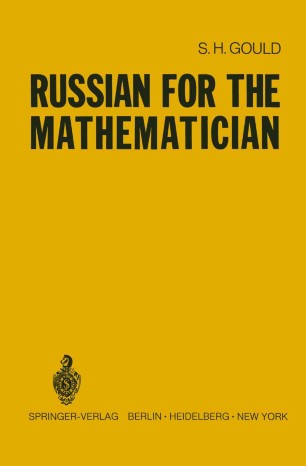 Russian for the Mathematician

The Board of Trustees of the American Mathematical Society, expressing its belief that a great deal of time would be saved for mathematicians if they could study a textbook of Russian precisely adapted to their needs, granted to the present author nine months leave of absence from his duties as Editor of Translations. To the Board, and to Gordon L. Walker, the Exec­ utive Director of the Society, who took the initiative in this matter with his customary energy and good will, the author is deeply gratefUl for the opportunity to write such a book. For indispensable help and advice in the preparation of the book, which was written chiefly in Gottingen, Moscow and Belgrade, gratitude is due to many people, especially to Martin Kneser of the Mathematics Institute in Gottingen, S. M. Nikol'skii and L. D. Kudrjavcev of the Steklov Institute in Moscow, T. P. Andjelic of the Mathematics Institute in the Yugoslav Academy of Arts and Sciences, G. Kurepa and B. Terzic of the Mathematics and Slav­ istics Departments in the University of Belgrade, and Alexander Schenker of the Department of Slavic Languages and Literatures in Yale University. For expert assistance, both secretarial and linguistic, the author is indebted to his wife Katherine and his son William, for proficient typing of the Reading Selections to Tamara Burmeister, Secretary of the Slavistics Depart­ ment in Belgrade, and Christine Lefian, editorial assistant in the American Mathematical Society. Providence, USA S. H.