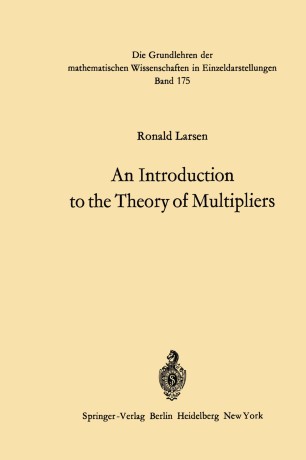 When I first considered writing a book about multipliers, it was my intention to produce a moderate sized monograph which covered the theory as a whole and which would be accessible and readable to anyone with a basic knowledge of functional and harmonic analysis. I soon realized, however, that such a goal could not be attained. This realization is apparent in the preface to the preliminary version of the present work which was published in the Springer Lecture Notes in Mathematics, Volume 105, and is even more acute now, after the revision, expansion and emendation of that manuscript needed to produce the present volume. Consequently, as before, the treatment given in the following pages is eclectric rather than definitive. The choice and presentation of the topics is certainly not unique, and reflects both my personal preferences and inadequacies, as well as the necessity of restricting the book to a reasonable size. Throughout I have given special emphasis to the func­ tional analytic aspects of the characterization problem for multipliers, and have, generally, only presented the commutative version of the theory. I have also, hopefully, provided too many details for the reader rather than too few.