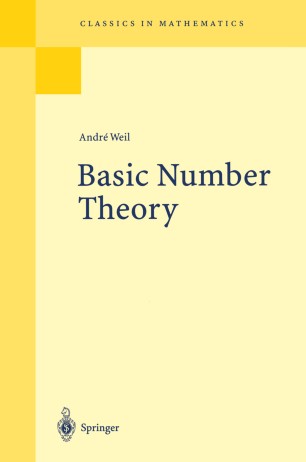 Part of the Classics in Mathematics book series (GL)

)tPI(}jlOV, e~oxov (10CPUljlr1.'CWV Aiux., llpop. . .dsup.. The first part of this volume is based on a course taught at Princeton University in 1961-62; at that time, an excellent set of notes was prepared by David Cantor, and it was originally my intention to make these notes available to the mathematical public with only quite minor changes. Then, among some old papers of mine, I accidentally came across a long-forgotten manuscript by Chevalley, of pre-war vintage (forgotten, that is to say, both by me and by its author) which, to my taste at least, seemed to have aged very well. It contained a brief but essentially com­ plete account of the main features of classfield theory, both local and global; and it soon became obvious that the usefulness of the intended volume would be greatly enhanced if I included such a treatment of this topic. It had to be expanded, in accordance with my own plans, but its outline could be preserved without much change. In fact, I have adhered to it rather closely at some critical points.

André Weil was born on May 6, 1906 in Paris. After studying mathematics at the École Normale Supérieure and receiving a doctoral degree from the University of Paris in 1928, he held professorial positions in India, France, the United States and Brazil before being appointed to the Institute for Advanced Study, Princeton in 1958, where he remained until he died on August 6, 1998.

André Weil's work laid the foundation for abstract algebraic geometry and the modern theory of abelian varieties. A great deal of his work was directed towards establishing the links between number theory and algebraic geometry and devising modern methods in analytic number theory. Weil was one of the founders, around 1934, of the group that published, under the collective name of  N. Bourbaki, the highly influential multi-volume treatise Eléments de mathématique.

"L.R. Shafarevich showed me the first edition in autumn 1967 in Moscow and said that this book will be from now on the book about class field theory. In fact it is by far the most complete treatment of the main theorems of algebraic number theory, including function fields over finite constant fields, that appeared in book form. The theory is presented in a uniform way starting with topological fields and Haar measure on related groups, and it includes not only class field theory but also the theory of simple algebras over local and global fields, which serves as a foundation for class field theory. The spirit of the book is the idea that all this is asic number theory' about which elevates the edifice of the theory of automorphic forms and representations and other theories.
To develop this basic number theory on 312 pages efforts a maximum of concentration on the main features. So, there is absolutely no example which illustrates the rather abstract material and brings it nearer to the heart of the reader.
This is not a book for beginners. This book is written in the spirit of the early forties and just this makes it a valuable source of information for everyone who is working about problems related to number and function fields."
Zentralblatt MATH, 823
Buy options