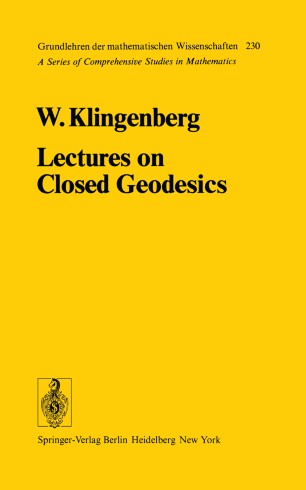 The question of existence of c10sed geodesics on a Riemannian manifold and the properties of the corresponding periodic orbits in the geodesic flow has been the object of intensive investigations since the beginning of global differential geo­ metry during the last century. The simplest case occurs for c10sed surfaces of negative curvature. Here, the fundamental group is very large and, as shown by Hadamard [Had] in 1898, every non-null homotopic c10sed curve can be deformed into a c10sed curve having minimallength in its free homotopy c1ass. This minimal curve is, up to the parameterization, uniquely determined and represents a c10sed geodesic. The question of existence of a c10sed geodesic on a simply connected c10sed surface is much more difficult. As pointed out by Poincare [po 1] in 1905, this problem has much in common with the problem ofthe existence of periodic orbits in the restricted three body problem. Poincare [l.c.] outlined a proof that on an analytic convex surface which does not differ too much from the standard sphere there always exists at least one c10sed geodesic of elliptic type, i. e., the corres­ ponding periodic orbit in the geodesic flow is infinitesimally stable.