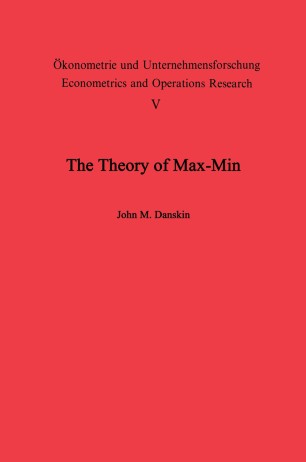 Max-Min problems are two-step allocation problems in which one side must make his move knowing that the other side will then learn what the move is and optimally counter. They are fundamental in parti­ cular to military weapons-selection problems involving large systems such as Minuteman or Polaris, where the systems in the mix are so large that they cannot be concealed from an opponent. One must then expect the opponent to determine on an optlmal mixture of, in the case men­ tioned above, anti-Minuteman and anti-submarine effort. The author's first introduction to a problem of Max-Min type occurred at The RAND Corporation about 1951. One side allocates anti-missile defenses to various cities. The other side observes this allocation and then allocates missiles to those cities. If F(x, y) denotes the total residual value of the cities after the attack, with x denoting the defender's strategy and y the attacker's, the problem is then to find Max MinF(x, y) = Max [MinF(x, y)] .