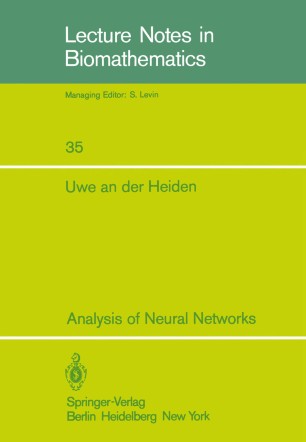 The purpose of this work is a unified and general treatment of activity in neural networks from a mathematical pOint of view. Possible applications of the theory presented are indica­ ted throughout the text. However, they are not explored in de­ tail for two reasons : first, the universal character of n- ral activity in nearly all animals requires some type of a general approach~ secondly, the mathematical perspicuity would suffer if too many experimental details and empirical peculiarities were interspersed among the mathematical investigation. A guide to many applications is supplied by the references concerning a variety of specific issues. Of course the theory does not aim at covering all individual problems. Moreover there are other approaches to neural network theory (see e.g. Poggio-Torre, 1978) based on the different lev­ els at which the nervous system may be viewed. The theory is a deterministic one reflecting the average be­ havior of neurons or neuron pools. In this respect the essay is written in the spirit of the work of Cowan, Feldman, and Wilson (see sect. 2.2). The networks are described by systems of nonlinear integral equations. Therefore the paper can also be read as a course in nonlinear system theory. The interpretation of the elements as neurons is not a necessary one. However, for vividness the mathematical results are often expressed in neurophysiological terms, such as excitation, inhibition, membrane potentials, and impulse frequencies. The nonlinearities are essential constituents of the theory.