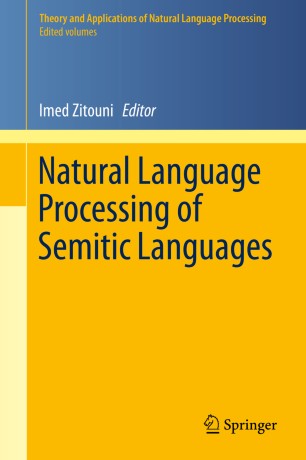 Research in Natural Language Processing (NLP) has rapidly advanced in recent years, resulting in exciting algorithms for sophisticated processing of text and speech in various languages. Much of this work focuses on English; in this book we address another group of interesting and challenging languages for NLP research: the Semitic languages. The Semitic group of languages includes Arabic (206 million native speakers), Amharic (27 million), Hebrew (7 million), Tigrinya (6.7 million), Syriac (1 million) and Maltese (419 thousand). Semitic languages exhibit unique morphological processes, challenging syntactic constructions, and various other phenomena that are less prevalent in other natural languages. These challenges call for unique solutions, many of which are described in this book.

The 13 chapters presented in this book bring together leading scientists from several universities and research institutes worldwide. While this book devotes some attention to cutting-edge algorithms and techniques, its primary purpose is a thorough explication of best practices in the field. Furthermore, every chapter describes how the techniques discussed apply to Semitic languages. The book covers both statistical approaches to NLP, which are dominant across various applications nowadays, and the more traditional, rule-based approaches, that were proven useful for several other application domains. We hope that this book will provide a "one-stop-shop'' for all the requisite background and practical advice when building NLP applications for Semitic languages.

Dr. Imed Zitouni is a Principal Researcher at Microsoft leading the Relevance Measurement Sciences group. Imed received his M.Sc. and Ph.D. with the highest-honors from the University-of-Nancy1 France.

In 1995, he obtained a MEng degree in computer science from ENSI in Tunisia. He is a senior member of IEEE, served as a member of the IEEE Speech and Language Processing Technical Committee (99-11), the Information Officer of the ACL SIG on Semitic-Languages, associate editor of TALIP ACM journal and a member of ISCA and ACL. Imed served as chair and reviewing-committee-member of several conferences and journals and he is the author/co-author of more than 100 patents and papers in international conferences and journals. Imed’s research interest is in the area of Multilingual Natural Language Processing (NLP), including Information Retrieval, Information Extraction, Language modeling, etc. Imed has particular interest in advancing state of the art technology in the area of Semitic NLP, especially Arabic.

Imed’s current research interest is in the area of Multilingual Information Retrieval focusing on the use of statistics and machine learning techniques to develop web scale offline and online metrics. He also working on the use of NLP to add a layer of semantics and understanding to search engines. Prior to joining Microsoft, Imed was a Senior Researcher at IBM for almost a decade, where he led several Multilingual NLP projects, including Arabic NLP, informatics extraction, semantic role labeling, language modeling, machine translation and speech recognition. Prior to IBM, Imed was a researcher at Bell Laboratories, Lucent Technologies, for almost half dozen years working on language modeling, speech recognition, spoken dialog systems and speech understanding. Imed also experiment the startup experience at DIALOCA in Paris, France, working on e-mail steering and language modeling and served as temporary assistant professor at the University of Nancy 1, France.