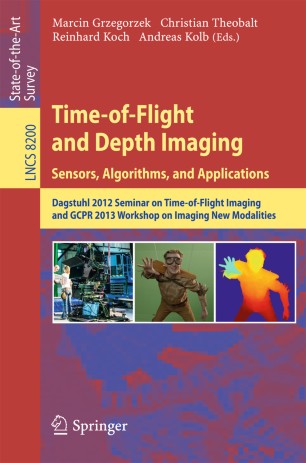 Cameras for 3D depth imaging, using either time-of-flight (ToF) or structured light sensors, have received a lot of attention recently and have been improved considerably over the last few years. The present techniques make full-range 3D data available at video frame rates, and thus pave the way for a much broader application of 3D vision systems.

A series of workshops have closely followed the developments within ToF imaging over the years. Today, depth imaging workshops can be found at every major computer vision conference. The papers presented in this volume stem from a seminar on Time-of-Flight Imaging held at Schloss Dagstuhl in October 2012. They cover all aspects of ToF depth imaging, from sensors and basic foundations, to algorithms for low level processing, to important applications that exploit depth imaging. In addition, this book contains the proceedings of a workshop on Imaging New Modalities, which was held at the German Conference on Pattern Recognition in Saarbrücken, Germany, in September 2013. A state-of-the-art report on the Kinect sensor and its applications is followed by two reports on local and global ToF motion compensation and a novel depth capture system using a plenoptic multi-lens multi-focus camera sensor.