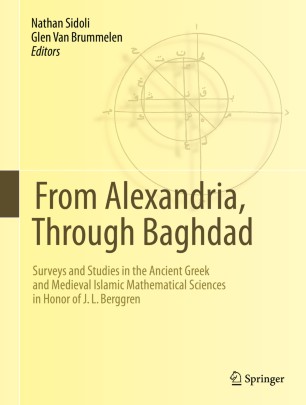 From Alexandria, Through Baghdad

Surveys and Studies in the Ancient Greek and Medieval Islamic Mathematical Sciences in Honor of J.L. Berggren

This book honors the career of historian of mathematics J.L. Berggren, his scholarship, and service to the broader community. The first part, of value to scholars, graduate students, and interested readers, is a survey of scholarship in the mathematical sciences in ancient Greece and medieval Islam. It consists of six articles (three by Berggren himself) covering research from the middle of the 20th century to the present. The remainder of the book contains studies by eminent scholars of the ancient and medieval mathematical sciences. They serve both as examples of the breadth of current approaches and topics, and as tributes to Berggren's interests by his friends and colleagues.