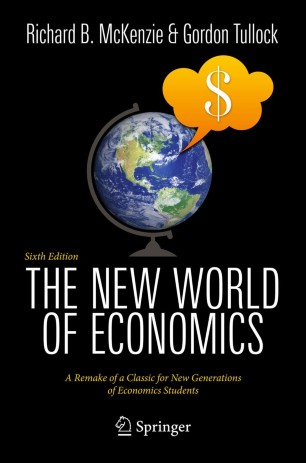 The New World of Economics

A Remake of a Classic for New Generations of Economics Students

The New World of Economics, 6th edition, by Richard McKenzie and Gordon Tullock, represents a revival of a classic text that, when it was first published, changed substantially the way economics would be taught at the introductory and advanced levels of economics for all time.  In a very real sense, many contemporary general-audience economics books that seek to apply the “economic way of thinking” to an unbounded array of social issues have grown out of the disciplinary tradition established by earlier editions of The New World of Economics.

This new edition of The New World will expose new generations of economics students to how McKenzie and Tullock have applied in a lucid manner a relatively small number of economic concepts and principles to a cluster of topics that have been in the book from its first release and to a larger number of topics that are new to this edition, with the focus of the new topics on showing students how economic thinking can be applied to business decision making.  This edition continues the book’s tradition of taking contrarian stances on important economic issues.  Economics professors have long reported that The New World is a rare book in that students will read it without being required to do so.

Richard McKenzie is the Walter B. Gerken Professor of Economics and Management at the Merage School of Business, University of California, Irvine. He has written over thirty academic and general-audience books. He is also co-author with Dwight Lee of a widely used textbook, Microeconomics for MBAs: The Economic Way of Thinking for Managers. His book with Gordon Tullock, The New World of Economics, has been used over the years in most of the country’s leading colleges and universities and has been translated into several languages. Professor McKenzie’s most recent general-audience book is HEAVY! - The Surprising Reasons America Is the Land of the Free — And the Home of the Fat.

Gordon Tullock is a University Professor (Emeritus) of Law and Economics and Distinguished Research Fellow at the James M. Buchanan Center for Political Economy, George Mason University. He is one of the founders of public choice economics and has done pioneering work in the political economy of rent seeking, as well as any number of economic subdisciplines that emerged during his long academic career.  His book The Calculus of Consent, which he coauthored with James Buchanan, is a widely acknowledged classic in economics, first published a half-century ago.