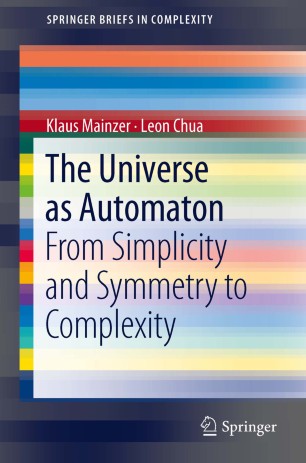 The Universe as Automaton

From Simplicity and Symmetry to Complexity

This booklet is an essay at the interface of philosophy and complexity research, trying to inspire the reader with new ideas and new conceptual developments of cellular automata.  Going beyond the numerical experiments of Steven Wolfram, it is argued that cellular automata must be considered complex dynamical systems in their own right, requiring appropriate analytical models in order to find precise answers and predictions in the universe of cellular automata.

Indeed, eventually we have to ask whether cellular automata can be considered models of the real world and, conversely, whether there are limits to our modern approach of attributing the world, and the universe for that matter, essentially a digital reality.

and he holds several honoris cause doctorates.

“This book contains a great deal of some central topics and actual problems of cellular automata theory. It is an introduction which emphasizes the mathematically interesting and beauty aspects of cellular automata and complex dynamical systems as well as their synthesis on an ambitious level suitable for graduate students and researchers. … To understand the complex computational world, the authors stress that cellular automata are an excellent instructional tool.” (Hasan Akin, Zentralblatt MATH, Vol. 1237, 2012)
Buy options