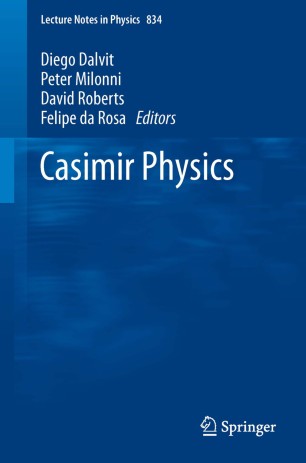 Casimir effects serve as primary examples of directly observable manifestations of the nontrivial properties of quantum fields, and as such are attracting increasing interest from quantum field theorists, particle physicists, and cosmologists. Furthermore, though very weak except at short distances, Casimir forces are universal in the sense that all material objects are subject to them. They are thus also an increasingly important part of the physics of atom-surface interactions, while in nanotechnology they are being investigated not only as contributors to ‘stiction’ but also as potential mechanisms for actuating micro-electromechanical devices.

While the field of Casimir physics is expanding rapidly, it has reached a level of maturity in some important respects: on the experimental side, where most sources of imprecision in force measurements have been identified as well as on the theoretical side, where, for example, semi-analytical and numerical methods for the computation of Casimir forces between bodies of arbitrary shape have been successfully developed. This book is, then, a timely and comprehensive guide to the essence of Casimir (and Casimir-Polder) physics that will have lasting value, serving the dual purpose of an introduction and reference to the field. While this volume is not intended to be a unified textbook, but rather a collection of largely independent chapters written by prominent experts in the field, the detailed and carefully written articles adopt a style that should appeal to non-specialist researchers in the field as well as to a broader audience of graduate students.