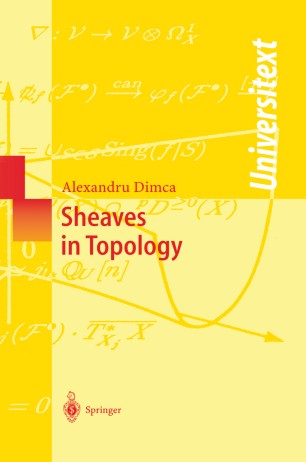 Constructible and perverse sheaves are the algebraic counterpart of the decomposition of a singular space into smooth manifolds, a great geometrical idea due to R. Thom and H. Whitney. These sheaves, generalizing the local systems that are so ubiquitous in mathematics, have powerful applications to the topology of such singular spaces (mainly algebraic and analytic complex varieties).

This introduction to the subject can be regarded as a textbook on "Modern Algebraic Topology'', which treats the cohomology of spaces with sheaf coefficients (as opposed to the classical constant coefficient cohomology).

The first five chapters introduce derived categories, direct and inverse images of sheaf complexes, Verdier duality, constructible and perverse sheaves, vanishing and characteristic cycles. They also discuss relations to D-modules and intersection cohomology. The final chapters apply this powerful tool to the study of the topology of singularities, of polynomial functions and of hyperplane arrangements.

Some fundamental results, for which excellent sources exist, are not proved but just stated and illustrated by examples and corollaries. In this way, the reader is guided rather quickly from the A-B-C of the theory to current research questions, supported in this by a wealth of examples and exercises.

Alexandru Dimca obtained his PhD in 1981 from the University of Bucharest. His field of interest is the topology of algebraic varieties, singularities of spaces and maps, Hodge theory and D-modules.

Dimca has been a visiting member of the Max Planck Institute in Bonn and the Institute for Advanced Study in Princeton. He is the author of three monographs and over 60 research papers published in math journals all over the world.

Dimca has extensively taught at universities in Romania, Australia, the USA, and France, and he uses this teaching experience to convey effectively, to a wider mathematical community, the abstract and difficult ideas of algebraic topology.

"The book … is devoted to showing topologists and geometers what perverse sheaves are and what they are good for. … The author uses the language of sheaves as a unifying framework, pointing out the special features in the topological and analytic cases. Throughout the book he gives examples and motivations for the different results and concepts. … The material covered is very extensive … ." (Ana Jeremías López, Mathematical Reviews, 2005j)

"The author’s aim is to provide the reader with a systematic introduction to the theory of constructible sheaves … . the reader will meet a number of theorems that appear, step-by-step, in increasing generality and applicability. This methodological strategy is very pleasant, in that it makes the text overall enlightening and instructive … . Written in a very lucid, detailed and rigorous style, with an abundance of concrete examples and applications, it serves … in a perfect way. Also experts in the field will find quite a bit of novelties … ." (Werner Kleinert, Zentralblatt MATH, Vol. 1043 (18), 2004)

"This book covers a majority of basic notions and results in the theory of constructive sheaves on complex spaces and it provides a rich amount of geometrical examples and applications. The author takes the reader from simpler, older results to the most powerful and general results currently available. … The book is well written and I would like to recommend it to anybody interested in the topic." (EMS Newsletter, December, 2005)