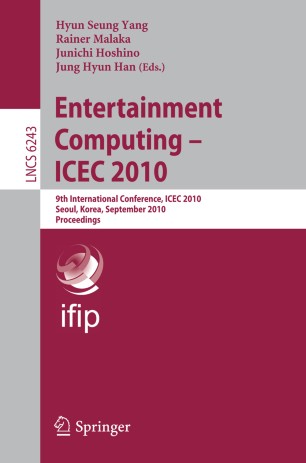 The 9th International Conference on Entertainment Computing (ICEC 2010) was held in September 2010 in Seoul Korea. After Pittsburgh (2008) and Paris (2009), the event returned to Asia. The conference venue was the COEX Exhibition Hall in one of the most vivid and largest cities of the world. This amazing mega-city was a perfect location for the c- ference. Seoul is on the one hand a metropolitan area with modern industries, univer- ties and great economic power. On the other hand, it is also a place with a very fas- nating historical and cultural background. It bridges the past and the future as well as east and west. Entertainment computing also aims at building bridges from technology to leisure, education, culture and work. Entertainment computing at its core has a strong focus on computer games. However, it is not only about computer games. The last ICEC c- ferences have shown that entertainment computing is a much wider field. For instance in games, technology developed for games can be used for a wide range of appli- tions such as therapy or education. Moreover, entertainment does not necessarily have to be understood as games. Entertainment computing finds its way to stage perfo- ances and all sorts of new interactive installations.