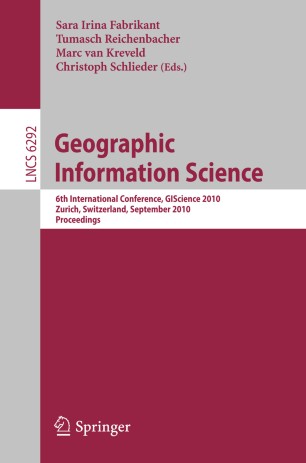 Since its inception in Savannah, Georgia (USA) in 2000, the highly successful GIScience conferenceseries (www.giscience.org)has regularlyattractedover250 researchers from all over the world whose common interest lies in advancing the research frontiers of fundamental aspects of the production, dissemination, and use of geographic information. The conference is bi-annual and brings together leading researchers from all cognate disciplines re?ecting the interdisciplinary breadth of GIScience, including (but not limited to) geography, cognitive s- ence, computer science, engineering, information science, mathematics, philo- phy, psychology, social science, and (geo)statistics. Following the, literally breathtaking,conference in Park City, Utah (USA) at 2103m, the sixth GIScience 2010 conference returned to Europe for the second time. The 2010 conference was held in Zurich, Switzerland, a place nominated repeatedly as the world’s most livable (if not cheapest!) city. Zurich is also a GIScience landmark, as in 1990 one of the founders of the GIScience conference series, Dr. Michael Goodchild, delivered a memorable talk setting out how f- damental research on GISystems could turn into GIScience at the very same conference location during the Spatial Data Handling Symposium.