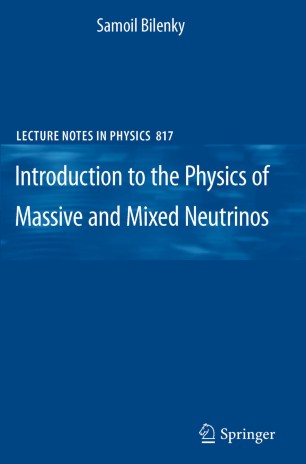 Introduction to the Physics of Massive and Mixed Neutrinos

The discovery of neutrino oscillations opened a new era in neutrino physics: an era of investigation of neutrino masses, mixing, magnetic moments and other neutrino properties. On the other hand small neutrino masses cannot be explained by the standard Higgs mechanism of mass generation. Thus, small neutrino masses are the first signature in particle physics of a new beyond the Standard Model physics. One of the most important challenges ahead is the problem of the very nature of neutrinos with definite masses: are they Dirac neutrinos possessing a conserved lepton number which distinguish neutrinos and antineutrinos or Majorana neutrinos with identical neutrinos and antineutrinos? Many experiments of the next generation and new neutrino facilities are now under preparation and investigation. This book is intended as an gentle but detailed introduction to the physics of massive and mixed neutrinos that will prepare graduate students and young researchers entering the field for the exciting years of neutrino physics to come. It is based on numerous lectures given by the author, one of the pioneers of modern neutrino physics (recipient of the Bruno Pontecorvo Prize 2002), at different institutions and schools.