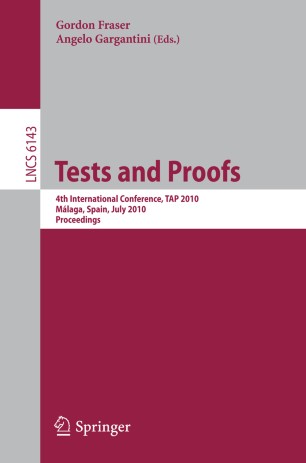 This volume contains the proceedings of TAP 2010, the 4th International C- ference on Tests and Proofs held during July 1–2 in M´ alaga, Spain as part of TOOLS Federated Conferences. TAP 2010wasthe fourth event of an ongoingseriesof conferencesdevoted to the convergence of proofs and tests. In the past, proving and testing were seen as very di?erent and even competing techniques. Proving people would say: If correctness is proved, what do we need tests for? Testers, on the other hand, would claim that proving is too limited in applicability and testing is the only truepathtocorrectness. Ofcourse,bothhaveapoint,buttoquoteEdBrinksma from his 2009 keynote at the Dutch Testing Day and Testcom/FATES: “Who would want to ?y in an airplane with software proved correct, but not tested?” Indeed, the true power lies in the combination of both approaches. Today, m- ern test systems rely on techniques deeply rooted in formal proof techniques, and testing techniques make it possible to apply proof techniques where there was no possibility previously. At a time when even mainstream software engineering conferences start f- turing papers with both “testing” and “proving”in their titles, we are clearly on the verge of a new age where testing and proving are not competing but ?nally accepted as complementary techniques. Albeit, we are not quite there yet, and so the TAP conferences aim to provide a forum for researchers working on the converging topics and to raise general awareness of this convergence.