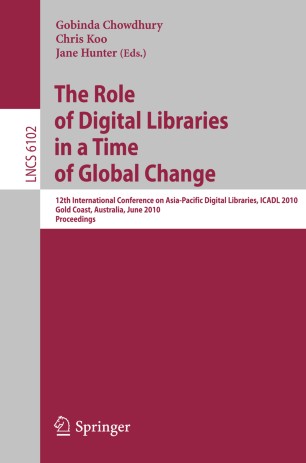 The Role of Digital Libraries in a Time of Global Change

The year 2010 was a landmark in the history of digital libraries because for the first time this year the ACM/IEEE Joint Conference on Digital Libraries (JCDL) and the annual International Conference on Asia-Pacific Digital Libraries (ICADL) were held together at the Gold Coast in Australia. The combined conferences provided an - portunity for digital library researchers, academics and professionals from across the globe to meet in a single forum to disseminate, discuss, and share their valuable - search. For the past 12 years ICADL has remained a major forum for digital library - searchers and professionals from around the world in general, and for the Asia-Pacific region in particular. Research and development activities in digital libraries that began almost two decades ago have gone through some distinct phases: digital libraries have evolved from mere networked collections of digital objects to robust information services designed for both specific applications as well as global audiences. Con- quently, researchers have focused on various challenges ranging from technical issues such as networked infrastructure and the creation and management of complex digital objects to user-centric issues such as usability, impact and evaluation. Simulta- ously, digital preservation has emerged and remained as a major area of influence for digital library research. Research in digital libraries has also been influenced by s- eral socio-economic and legal issues such as the digital divide, intellectual property, sustainability and business models, and so on. More recently, Web 2.