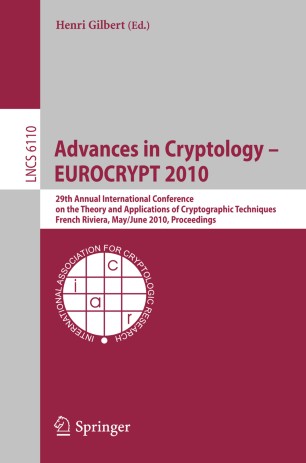 These are the proceedings of Eurocrypt 2010, the 29th in the series of Eu- pean conferences on the Theory and Application of Cryptographic Techniques. The conference was sponsored by the International Association for Cryptologic Research and held on the French Riviera, May 30–June 3, 2010. A total of 191 papers were received of which 188 were retained as valid submissions. These were each assigned to at least three Program Committee members and a total of 606 review reports were produced. The printed record of the reviews and extensive online discussions that followed would be almost as voluminous as these proceedings. In the end 35 submissions were accepted with twosubmissionpairsbeingmergedtogive33paperspresentedattheconference. The ?nal papers in these proceedings were not subject to a second review before publication and the authors are responsible for their contents. The ProgramCommittee, listed on the next page, deservesparticular thanks for all their hard work, their outstanding expertise, and their constant c- mitment to all aspects of the evaluation process. These thanks are of course extended to the very many external reviewers who took the time to help out during the evaluation process.It was also a greatpleasure to honor and welcome Moti Yung who gave the 2010 IACR Distinguished Lecture.