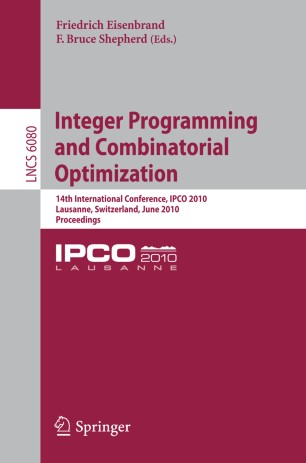 Theidea ofa refereedconferencefor the mathematicalprogrammingcommunity was proposed by Ravi Kannan and William Pulleyblank to the Mathematical Programming Society (MPS) in the late 1980s. Thus IPCO was born, and MPS has sponsored the conference as one of its main events since IPCO I at the University of Waterloo in 1990. The conference has become the main forum for recent results in Integer Programming and Combinatorial Optimization in the non-Symposium years. This volume compiles the papers presented at IPCO XIV held June 9-11, 2010, at EPFL in Lausanne. The scope of papers considered for IPCO XIV is likely broader than at IPCO I. This is sometimes due to the wealth of new questions and directions brought from related areas. It can also be due to the successful application of “math programming” techniques to models not tra- tionally considered. In any case, the interest in IPCO is greater than ever and this is re?ected in both the number (135) and quality of the submissions. The ProgrammeCommittee with 13 memberswasalsoIPCO’slargest. We thankthe members of the committee, as well as their sub-reviewers, for their exceptional (and time-consuming) work and especially during the online committee meeting held over January. The process resulted in the selection of 34 excellent research papers which were presented in non-parallel sessions over three days in L- sanne. Unavoidably, this has meant that many excellent submissions were not able to be included.