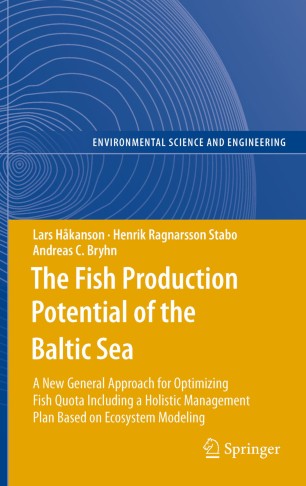 The Fish Production Potential of the Baltic Sea

It presents a new approach to set fish quota based on holistic ecosystem modeling (the CoastWeb-model) and also a plan to optimize a sustainable management of the Baltic Sea including a cost-benefit analysis. This plan accounts for the production of prey and predatory fish under different environmental conditions, professional fishing, recreational fishing and fish cage farm production plus an analysis of associated economic values. Several scenarios and remedial strategies for Baltic Sea management are discussed and an "optimal" strategy motivated and presented, which challenges the HELCOM strategy that was accepted by the Baltic States in November 2007. The strategy advocated in this book would create more than 7000 new jobs, the total value of the fish production would be about 930 million euro per year plus 1000 million euro per year related to the willingness-to-pay to combat the present conditions in the Baltic Sea. Our strategy would cost about 370 million euro whereas the HELCOM strategy would cost about 3100 million euro per year. The "optimal" strategy is based on a defined goal - that the water clarity in the Gulf of Finland should return to what it was 100 years ago.