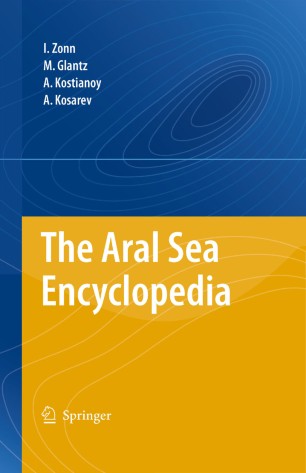 The situation of the Aral Sea is known as one of the worst man-made environmental crises of the twentieth and twenty-first centuries. Many have seen the satellite photos evidencing the startling shrinkage and deterioration of the sea, as it was a few decades ago and how it appears today. Whereas the Aral Sea was the world’s fourth-largest inland body of water in 1960, it has now shrunk to a small fraction of that within three increasingly saline and polluted parts, primarily due to the diversion of waters for agricultural irrigation. The Aral Sea Encyclopedia is devoted to the remarkable phenomenon of the possibility of Aral Sea’s imminent disappearance from the Earth in the time span of a single human generation.

It first describes the sea before it started drying-out, and then the actions and efforts of the Central Asian countries, as well as the international community, to mitigate the socioeconomic and environmental hazards caused by this desiccation and increasing salinity. This comprehensive reference not only addresses the key environmental issues and presents national and international programs. It also documents the history of the related research studies, the involvement of prominent historical figures, and the chronology of events over three centuries, which became the milestones in the economic development of the Aral Sea and its subsequent diminution.

The publication of the Aral Sea Encyclopedia initiates a group of similar valuable references that gather multi-disciplinary perspectives on the world's seas, including planned volumes on the Caspian and Black Seas and the Sea of Japan.