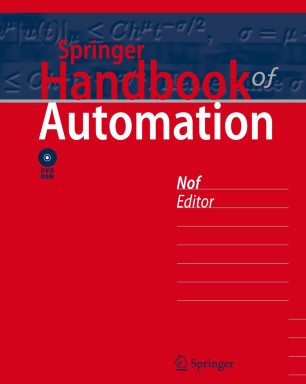 Automation is undergoing a major transformation in scope and dimension and plays an increasingly important role in the global economy and in our daily lives. Engineers combine automated devices with mathematical and organizational tools to create complex systems for a rapidly expanding range of applications and human activities. The Springer Handbook of Automation incorporates these new developments and presents a widespread and well-structured conglomeration of new emerging application areas of automation. Besides manufacturing as a primary application of automation, the handbook provides the most advanced, comprehensive, and balanced coverage of the technical and engineering aspects of automation. It covers all the major cutting-edge technologies of production automation and material handling, and contains new application areas such as medical systems and health, transportation, security and maintenance, service, construction and retail as well as production or logistics.

This Springer Handbook, edited by an internationally renowned and experienced expert is not only an ideal resource for automation experts but also for people new to this expanding field such as engineers, computer scientists, designers.

Shimon Y. Nof is Professor of Industrial Engineering at Purdue University, since 1977, and Director of the NSF and industry funded PRISM Center for Production, Robotics, and Integration Software for Manufacturing & Management (established 1991) whose motto is: "Knowledge Through Information, Wisdom Through Collaboration" and the PGRN, PRISM Global Research Network. He earned his BSc and MSc in Industrial Engineering & Management, Technion, Israel Institute of Technology, specializing in human-machine systems; his PhD in Industrial & Operations Engineering, University of Michigan, specializing in automation of facilities design; Dr. h.c. from the University of Sibiu, Romania.

He has over eight years of experience in full-time industrial and governmental positions, and has been a visiting professor at MIT and at universities in Chile, Europe, Hong Kong, Israel, Japan, and Mexico. Currently, he is the President of IFPR, the International Foundation of Production Research, he served as IFPR Secretary General during 1993-2007; recent Chair, Coordinating Committee on Manufacturing and Logistics Systems (CC5) of IFAC, the International Federation of Automatic Control. Professor Nof pioneered knowledge-based computer-aided facility design and control models, robot ergonomics, and collaborative control theory.

Professor Nof is the author, co-author and editor of ten books, including the Handbook of Industrial Robotics 1st and 2nd editions, the International Encyclopedia of Robotics, Information and Collaboration Models of Integration, and Industrial Assembly. In addition, he has published over 130 refereed journal articles and over 300 conference articles and book chapters. Among his honors, he is a Fellow of The Institute of Industrial Engineering, recipient of the Joseph Engelberger Award and Medal for Robotics Education, and Member of the Inaugural Book of Great Teachers of Purdue University. He is the editor of the new Springer Book Series on ACES, Automation, Collaboration, and E-Services.

"This is an important and ambitious project, and will be of interest to those involved with the IEEE Transactions on Automation Science and Engineering. I think Shimon Nof is the perfect person for this job".

Chair of Advisory Board IEEE Transactions on Automation Science and Engineering

“This handbook … contains a DVD with the complete PDF version of the book, providing the reader with a friendly and intuitive interactive access. … this is an outstanding handbook, covering automation from all kinds of perspectives, applied scenarios, and new trends, which will be, without doubt, very useful for our community. Congratulations to Nof and coworkers for a very good job.”

“First impression readers would have about the Springer Handbook of Automation is its comprehensive coverage of all aspects of the subject of automation. … provides a more detailed, useful discussion of control theory and fuzzy logic for advanced students and professionals. … interest to general engineering readers (or even general readers) who would like an introduction to the subject as well as a discussion of its history, e.g., the status of automation during the Greek and Arab eras. Summing Up: Recommended. General readers and professionals.” (S. D. El Wakil, Choice, Vol. 47 (7), March, 2010)

“This handbook includes a DVD of the full text, which is searchable. It is a huge volume, containing nearly 100 chapters and numerous figures. … includes numerous current references and uniform resource locators (URLs) for Web sites. This handbook will be very useful to those who are interested in automation. It emphasizes key concepts and practical applications, and it is up to date, thorough, professional, and compact. It will be helpful as an authoritative reference for understanding the latest developments and applications of automation.” (S. V. Nagaraj, ACM Computing Reviews, August, 2010)

“This handbook is intended as a resource for engineers, technicians, and scientists interested in the continuously expanding field of automation. Divided into 96 chapters by contributing authors, the handbook aims to cover all aspects of automation.” (IEEE Control Systems Magazine, Vol. 30, June, 2010)

“Springer Handbook of Automation is an excellent up-to-date resource of working knowledge with long-term evidence in the field. This handbook succeeds well in its intent to present the latest trends, theory, and new emerging applications of automation. The Springer Handbook of Automation should serve as an outstanding reference book for all automation professionals and also for general readers interested in this emerging subject.” (Lubomír Bakule, Zentralblatt MATH, Vol. 1218, 2011)