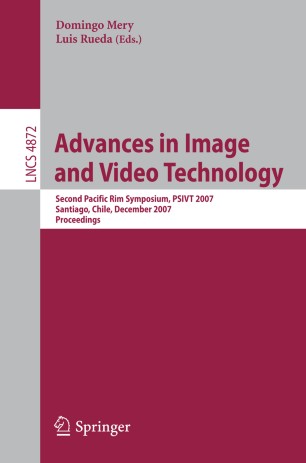 Advances in Image and Video Technology

These proceedings are a manifestation of the excellent scienti?c contributions presented at the Second IEEE Paci?c Rim Symposium on Video and Image Technology (PSIVT 2007), held in Santiago, Chile, during December 17–19, 2007. The symposium provided a forum for presenting and exploring the l- est research and developments in image and video technology. Discussing the possibilities and directions in these ?elds settled a place where both academic research and industrial activities were presented for mutual bene?t. The aim of the symposium was to promote and disseminate ongoing research on multi- dia hardware and image sensor technologies, graphics and visualization, image analysis, multiple view imaging and processing, computer vision applications, image and video coding, and multimedia processing. The volume is a realization of the ongoing success of the Paci?c Rim Symposium on Video and Image Te- nology for which the ?rst issue (PSIVT 2006) was last year in Hsinchu, Taiwan, Republic of China. PSIVT 2007 provides evidence of the growing stature of the Paci?c Rim s- enti?c community in video and image technology andof their impact worldwide. The symposium received contributions from 31 countries, registering a total of 155 papers, out of which 75 were accepted for publication in these proce- ings, which is equivalent to an acceptance rate of 48. 4%. The review process was carried out in seven di?erent themes, each composed of theme Co-chairs and a ProgramCommittee composed of internationally recognized scientists, all experts in their respective theme. Each paper was peer-reviewed by two to ?ve reviewers.