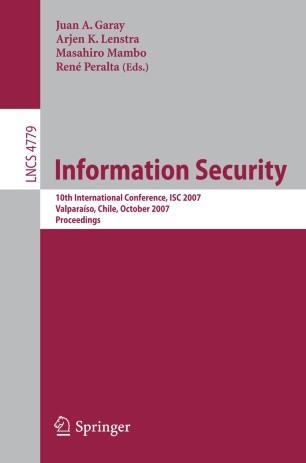 The 10th Information Security Conference (ISC 2007) was held in Valpara´ ?so, Chile, October 9–12, 2007. ISC is an annual international conference covering research in theory and applications of information security, aiming to attract high quality papers in all of its technical aspects. ISC was ?rst initiated as a workshop (ISW) in Japan in 1997, ISW 1999 was held in Malaysia and ISW 2000 in Australia. The name was changed to the current one when the conf- ence was held in Spain in 2001 (ISC 2001). The latest conferences were held in Brazil (ISC 2002), the UK (ISC 2003), the USA (ISC 2004), Singapore (ISC 2005),and Greece (ISC 2006). This year the event wassponsored by the Univ- sidad T´ ecnica Federico Santa Mar´ ?a (Valpara´ ?so, Chile), the Support Center for AdvancedTelecommunicationsTechnologyResearch,Foundation,SCAT(Tokyo, Japan), Microsoft Corporation, and Yahoo! Research. Re?ectingtheconference’sbroadscope,thisyear’smainProgramCommittee consisted of a relatively large number (49) of experts. Additionally, given the timely topic of cryptanalysis and design of hash functions and the NIST hash competition, the conference also featured a special Hash Subcommittee, chaired by Arjen Lenstra (EPFL and Bell Labs), as well as a panel on hashing, chaired by Bill Burr (NIST). The conference received 116 submissions, 29 of which were selected by the committee members for presentation at the conference, based on quality, originality and relevance. Each paper was anonymously reviewed by at least three committee members.