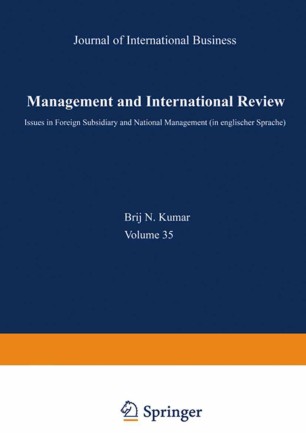 Part of the Journal of International Business book series (MIR)

impact in terms of new opportunity and risk. In Japan new markets can be in the offering as a result of expected deregulation. But on the other hand greater competition in the home-countries can become a threat, when a host of new fast growing Japanese companies appear on the scene as they break out of oversized and inflexible corporate groups, and seek their fortune independentlyon global markets. Six years after Tiananmen China stands today as one of the worlds leading growth nations. Because of this - and only for this reason - it is recognized and to a certain extent even respected by all countries as a partner in commerce and industry. Trade ties with the western world are stronger than ever before. Japanese trade with China has been booming since 1989, peaking at roughly U. S. $ 38 billion in 1993. U. S. -China trade has almost tripled since 1988 to $ 41 billion in 1993. A similar pattern is seen in China's trade with West Europe which according to Chinese figures amounted to U. S. $ 22 billion in 1993 which was 50% above the volume reached in 1992. Although in China "actual" investment can be way below "approved" investment, the fact remains, that some U. S. $ 20 billion have been poured into the country since 1991 and another $ 12 billion were absorbed in 1992.