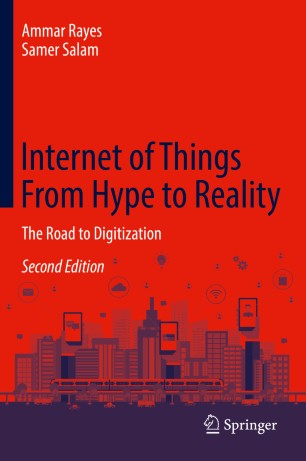 Internet of Things From Hype to Reality

The Road to Digitization

This textbook presents an end-to-end Internet of Things (IoT) architecture that comprises of devices, network, compute, storage, platform, applications along with management and security components with focus on the missing functionality in the current state of the art. As with the first edition, it is organized into six main parts: an IoT reference model; Fog computing and the drivers; IoT management and applications ranging from smart homes to manufacturing and energy conservation solutions; Smart Services in IoT; IoT standards; and case studies. The textbook edition features a new chapter entitled The Blockchain in IoT, updates based on latest standards and technologies, and new slide ware for professors. It features a full suite of classroom material for easy adoption.

Dr. Ammar Rayes is a Distinguished Engineer at Cisco Systems focusing on the Technology Strategy for Cisco Services and an Adjunct Professor at San Jose State University, where he teaches courses in the application of the Internet of Things.  His current work includes IoT, advanced analytics and data security. Prior to join Cisco, he was the Director of Traffic Engineering at Bellcore (formally Bell Labs). Ammar has authored three books, over 100 publications in refereed journals and conferences on advances in software & networking related technologies and over 25 patents. He is the Founding President of the International Society of Service Innovation Professionals, Editor-in-Chief of “Advances of Internet of Things” Journal and Editorial Board Member of the European Alliance for Innovation  - Industrial Networks and Intelligent Systems. He has served as Associate Editor of ACM Transactions on Internet Technology and Wireless Communications and Mobile Computing Journals, Guest Editor of multiple journals and several IEEE Communication Magazine issues, co-chaired the Frontiers in Service Conference and appeared as Keynote speaker at multiple IEEE and industry Conferences. At Cisco, Ammar is the founding chair of Cisco Services Research and Cisco Services Patent Council.  He received Cisco Chairman’s Choice Award for IoT Excellent Innovation & Execution. Ammar received his BS and MS Degrees in EE from the University of Illinois at Urbana- Champaign, IL, USA and his Ph.D. degree in EE from Washington University in St. Louis, MO, USA where he received the Outstanding Graduate Student Award in Telecommunications.

Samer Salam is a Principal Engineer at Cisco Systems. He focuses on the system and software architecture for networking products in addition to technology incubation. His work covers the areas of Semantic Technologies, Machine Reasoning, IoT Data Management and Analytics, Machine-to-Machine Communication as well as next-generation Layer 2 networking solutions and protocols. Previously at Cisco, he held multiple technical leadership and software development positions working on Carrier/Metro Ethernet services, OAM, network resiliency, system scalability, software quality, multi-service edge, broadband, MPLS and dial solutions. He holds over forty-five US and international patents, is author of more than twenty IETF drafts and RFCs, and has authored several articles in telecommunications industry journals. He is also a speaker at CiscoLive, and blogs on networking technology. He holds an M.S. degree in Computer Engineering from the University of Southern California in Los Angeles and a B.E. degree in Computer and Communications Engineering, with Distinction, from the American University of Beirut, where he received the Faculty of Engineering and Architecture Dean’s Award for Creative Achievement.