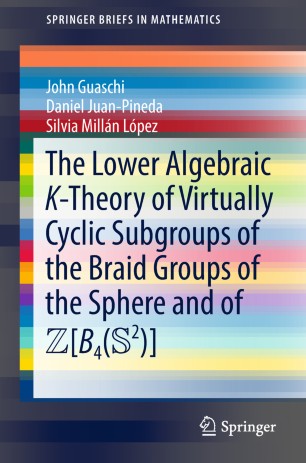 This volume deals with the K-theoretical aspects of the group rings of braid groups of the 2-sphere. The lower algebraic K-theory of the finite subgroups of these groups up to eleven strings is computed using a wide variety of tools. Many of the techniques extend to the general case, and the results reveal new K-theoretical phenomena with respect to the previous study of other families of groups. The second part of the manuscript focusses on the case of the 4-string braid group of the 2-sphere, which is shown to be hyperbolic in the sense of Gromov. This permits the computation of the infinite maximal virtually cyclic subgroups of this group and their conjugacy classes, and applying the fact that this group satisfies the Fibred Isomorphism Conjecture of Farrell and Jones, leads to an explicit calculation of its lower K-theory.

Researchers and graduate students working in K-theory and surface braid groups will constitute the primary audience of the manuscript, particularly those interested in the Fibred Isomorphism Conjecture, and the computation of Nil groups and the lower algebraic K-groups of group rings. The manuscript will also provide a useful resource to researchers who wish to learn the techniques needed to calculate lower algebraic K-groups, and the bibliography brings together a large number of references in this respect.