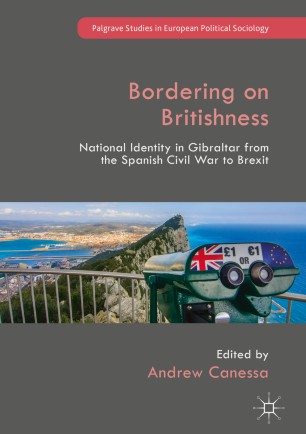 National Identity in Gibraltar from the Spanish Civil War to Brexit

This volume explores how Gibraltarian Britishness was constructed over the course of the twentieth century. Today most Gibraltarians are fiercely proud of their Britishness, sometimes even describing themselves as ‘more British than the British’ and Gibraltar’s Chief Minister in 2018 announced in a radio interview that “We see the world through British eyes.”  Yet well beyond the mid-twentieth century the inhabitants of the Rock were overwhelmingly Spanish speaking, had a high rate of intermarriage with Spaniards, and had strong class links and shared interests with their neighbours across the border.  At the same time, Gibraltarians had a very clear secondary status with respect to UK British people. By the beginning of the twenty-first century, however, Gibraltarians speak more English than Spanish (with increasing English monolingualism), have full British citizenship and are no longer discriminated against based on their ethnicity; they see themselves as profoundly different culturally to Spanish people across the border. Bordering on Britishness explores and interrogates these changes and examines in depth the evolving relationship Gibraltarians have with Britishness.  It also reflects on the profound changes Gibraltar is likely to experience because of Brexit when its border with Spain becomes an external EU border and the relative political strengths of Spain and the UK shift accordingly.  If Gibraltarian Britishness has evolved in the past it is certain to evolve in the future and this volume raises the question of how this might change if the UK’s political and economic strength – especially with respect to Gibraltar – begins to wane.
Andrew Canessa is Professor of Anthropology at the University of Essex and Head of the Department of Sociology there. He is the Principal Investigator of the ESRC-funded project: Bordering on Britishness. An Oral History Study of 20th Century Gibraltar.

Andrew Canessa is Professor of Anthropology and Head of the Department of Sociology at the University of Essex, UK. He is the Principal Investigator of the ESRC-funded project: Bordering on Britishness. An Oral History Study of 20th Century Gibraltar.

“Bordering on Britishness mounts a formidable challenge to much received wisdom about Gibraltar, its inhabitants and the enduring entanglements of empire. Peeling back the layers of sentiment and self-interest over generations, the authors reveal a people and a culture more complex, heterogenous and intriguing than a mere offshore bastion of Britishness. Here, Gibraltar emerges as a community where multiple contradictions are managed on an everyday basis; where changing patterns of linguistic, political and socio-economic differentiation have produced highly mobile subjectivities and intricate genealogies. A must-read for specialists and newcomers alike; or indeed anyone concerned with the interplay between memory, forgetting and the circuits of collective selfhood.” (Professor Stuart Ward, Head of the Saxo Institute, University of Copenhagen, Denmark)
Buy options