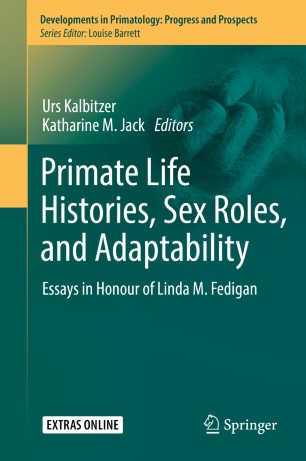 Professor Linda M. Fedigan, Member of the Order of Canada and a Fellow of the Royal Society of Canada, has made major contributions to our understanding of the behavioural ecology of primates. Furthermore, Linda Fedigan pioneered and continues to advance scholarship on the role of women in science, as well as actively promoting the inclusion of women in the academy. A symposium in honour of her career was held in Banff (Alberta, Canada) in December 2016, during which former and current students and collaborators, as well as scientists with similar research interests, presented and discussed their work and their connections to Linda Fedigan. These presentations and discussions are here presented as chapters in this festschrift.
The original works presented in this book are organized around four major research areas that have been greatly advanced and influenced by Linda Fedigan:

Urs Kalbitzer's interests include increasing his understanding of behavioral plasticity and the evolution of primate sociality by studying the variation in behavior, life-histories, hormones, genetics, and ecology between species. He completed his Diploma (which is equivalent to both a Bachelor of Science and Masters degree) in biology in 2008,  and his PhD in 2014 at the German Primate Center (DPZ) and the University of Göttingen, Germany. For his PhD thesis, he investigated behavioral, hormonal, and genetic differences among several species of baboon. After receiving his PhD, he began a postdoctoral fellowship with Linda Fedigan in the Department of Anthropology and Archeology at the University of Calgary to examine the benefits and costs of female sociality in the Santa Rosa capuchin monkeys. His fellowship in Calgary led to his collaborating with other primatologists within the department in studying the variety of species (including Old World monkeys, New World monkeys, and lemurs), and how primates rapidly adapt to changing environments. In 2017, Kalbitzer began a postdoctoral fellowship with Colin A. Chapman at McGill University, where he is continuing his research on the social behavior of female primates, primate adaptations to changing environments, and primate ecology and conservation.
Katharine (Kathy) Jack completed her MA (1995, under Mary Pavelka) and BSc (1992) at the University of Calgary. For her Master’s research, Kathy studied the behavior of peripheral male Japanese macaques during the mating season at the Arashiyama West site in south Texas, where Mary Pavelka first introduced her to Linda Fedigan. In 1997, she joined the doctoral program at the University of Alberta, where, under the guidance of Linda Fedigan, she studied male life history patterns in white-faced capuchins in Santa Rosa National Park in Costa Rica. In 2001, just months after completing her doctorate in Anthropology, Kathy took up a faculty position at Appalachian State University in Boone, North Caroline. In 2003, Kathy moved to Tulane University, where she currently holds the title of Professor of Anthropology and Director of Environmental Studies. After a three-year stint studying Cebus albifrons in coastal Ecuador, Kathy returned to Costa Rica in 2005 to take up the role of co-director of the Santa Rosa Primate Project with Linda (they were joined by Amanda Melin in 2011). Kathy’s research, which incorporates behavioral, demographic, genetic, and hormone data, focuses on life history patterns, dispersal, and reproductive strategies in male white-faced capuchins. She also works closely with Linda Fedigan and Fernando Campos on tracking the long-term impacts of forest protection, forest regeneration, and climate change on the howler and capuchin populations within Santa Rosa.