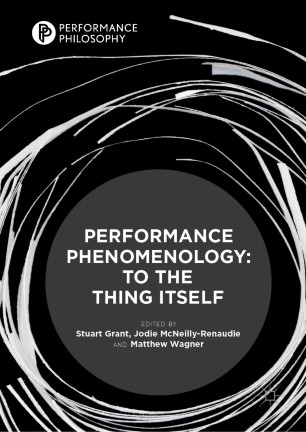 To The Thing Itself

This collection of essays addresses emergent trends in the meeting of the disciplines of phenomenology and performance. It brings together major scholars in the field, dealing with phenomenological approaches to dance, theatre, performance, embodiment, audience, and everyday performance of self. It argues that despite the wide variety of philosophical, ontological, epistemological, historical and methodological differences across the field of phenomenology, certain tendencies and impulses are required for an investigation to stand as truly phenomenological. These include: description of experience; a move towards fundamental conditions or underlying essences; and an examination of taken-for-granted presuppositions. The book is aimed at scholars and practitioners of performance looking to deepen their understanding of phenomenological concepts and methods, and philosophers concerned with issues of embodiment, performativity and enaction.

Stuart Grant is Senior Lecturer in Performance Studies at Monash University, Melbourne, Australia. He has published extensively in performance phenomenology, site-based performance, and other performance disciplines for over a decade. He is director of the site-specific performance company, The Environmental Performance Authority, and singer with the punk noise band, The Primitive Calculators.

Jodie McNeilly-Renaudie is a researcher and choreographer working at the intersection of philosophy and dance. She holds a PhD in Performance Studies from the University of Sydney, Australia, and is currently completing a second PhD in Philosophy on Husserl and religious experience at the Australian Catholic University. She has published widely in philosophy and performance, was co-author on Performance and Temporalisation: Time Happens (Palgrave, 2015), and writes dance and film reviews for Australian, Asian and European audiences.

Matthew Wagner is Senior Lecturer in Theatre and Performance at the University of Surrey, UK, and is the author of Shakespeare, Theatre, and Time (2012), along with various journal articles and book chapters. His research focuses primarily on Shakespearean dramaturgy and stage praxis; it also extends to broader reaches of theatrical temporality and questions of embodiment and spatiality in performance.