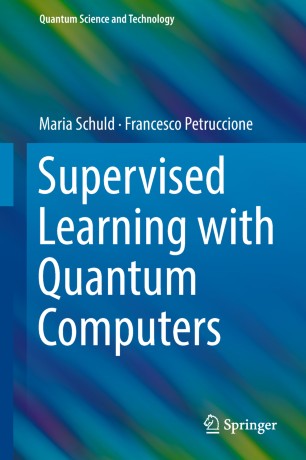 Part of the Quantum Science and Technology book series (QST)

Quantum machine learning investigates how quantum computers can be used for data-driven prediction and decision making. The books summarises and conceptualises ideas of this relatively young discipline for an audience of computer scientists and physicists from a graduate level upwards. It aims at providing a starting point for those new to the field, showcasing a toy example of a quantum machine learning algorithm and providing a detailed introduction of the two parent disciplines. For more advanced readers, the book discusses topics such as data encoding into quantum states, quantum algorithms and routines for inference and optimisation, as well as the construction and analysis of genuine ``quantum learning models''. A special focus lies on supervised learning, and applications for near-term quantum devices.

Francesco Petruccione received his PhD (1988) and ”Habilitation” (1994) from the University of Freiburg, Germany. Since 2004 he is Professor of Theoretical Physics at the University of KwaZulu-Natal in Durban, Africa, where in 2007 he was granted a South African Research Chair for Quantum Information Processing and Communication from the National Research Foundation. He is the co-author of “The theory of open quantum systems” (Oxford University Press, 2002) and has published more than 100 papers in refereed journals, adding up to more than 7000 citations. Francesco Petruccione’s research focusses on quantum information and open quantum systems.
Maria Schuld received her PhD degree from the University of KwaZulu-Natal in South Africa in 2017 as a fellow of the German Academic Foundation. Her Master’s degree was awarded by the Technical University of Berlin and supported through a scholarship of the German Academic Exchange Service (DAAD). Since 2013 she dedicates her research to the design of quantum machine learning algorithms, which she presented at numerous international conferences and in a range of research articles. Maria Schuld is a Post-Doc at the University of KwaZulu-Natal and works as a researcher for the Canadian-based quantum computing startup Xanadu.

“The book is very well written and contains sufficiently many examples and illustrations. The authors make a concerted effort to make the material accessible to both computer science graduates as well as scientists with a quantum physics background. … The intended audience are thus machine learning scientists that want to explore the quantum approach to their discipline or quantum information scientists that want to enter the field of machine learning.” (Andreas Maletti, zbMATH 1411.81008, 2019)
Buy options