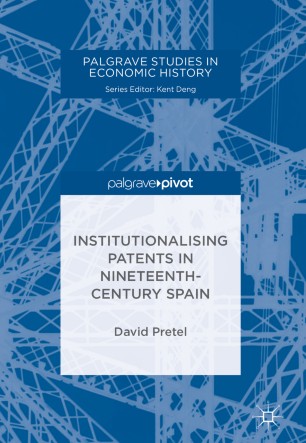 This book examines the development of the Spanish patent system in the years 1826 to 1902, providing a fundamental reassessment of its evolution in an international context. The Spanish case is particularly interesting because of this country’s location on the so-called European periphery and also because of the centrality of its colonial dimension. Pretel gauges the political regulation and organisation of the system, showing how it was established and how it evolved following international patterns of technological globalisation and the emergence of the ‘international patent system’ during the late nineteenth century.

Crucially, he highlights the construction and evolution of the patent system in response to the needs of Spain's technologically dependent economy. The degree of industrial backwardness in mid-nineteenth-century Spain set the stage for the institutionalisation of its modern patent system. This institutionalisation process also entailed the introduction of a new technological culture, social infrastructure and narrative that supported intellectual property rights. This book is important reading to all those interested in the history of patents and their role in globalisation.

“Pretel’s brilliant and concise book explores the Spanish patent system during the second half of the 19th century. He shows how this system was in the hands of intermediaries, lawyers and consulting engineers, who provided a complete response to the necessities of companies in Spain and abroad, particularly large foreign industrial firms. The Spanish patent system was planned and organised to stimulate technology transfer and the dissemination of technologies from France, the UK and the USA as a response to the perceived industrial underdevelopment of the Spanish economy.” (Santiago M. López, University of Salamanca, Spain)

“David Pretel’s book offers an original and stimulating analysis of the ambiguous role of patents in Spanish economic history. It subtly highlights the contradictions of the system by looking at its practical implementation and at players as essential as patent agents. His approach at different scales makes his work a significant contribution to the history of globalisation.” (Gabriel Galvez-Behar, University of Lille, France)

“Pretel provides in his book a critical analysis of the Spanish patent system in the nineteenth century. It offers a nuanced and intelligent study of the legal and administrative institutions linked to technology in metropolitan Spain. The book contains a coherent narrative that provides new outlooks on the interplay among institutions, cultural and political change, technological development, and economic growth in peripheral countries of the Atlantic space before the Great War.” (Juan Pan-Montojo, Autonomous University of Madrid, Spain)