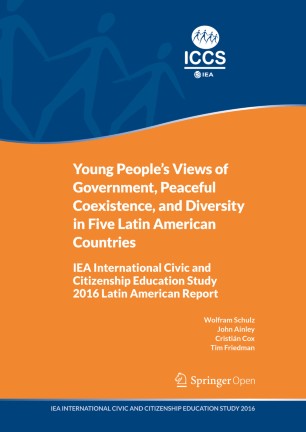 This open access report presents findings from the five Latin American countries that participated in the second cycle of the IEA International Civic and Citizenship Education Study (ICCS 2016). ICCS 2016 investigated the ways in which a range of countries are preparing their young people to undertake their roles as citizens during the second decade of the 21st century. The study also responded to new challenges in civic and citizenship education, and its findings allow robust comparisons of lower-secondary students’ attitudes to and perceptions of a wide range of aspects related to civics and citizenship.

The results presented in this report come mainly from data collected via a regional Latin American student questionnaire. The findings provide insights into Latin American lower-secondary students’ thoughts on government practices (e.g., corruption and authoritarian government), their attitudes toward peaceful coexistence (e.g., use of violence, disobedience to the law, empathy), and their perceptions of diversity in society (e.g., tolerance of and discrimination against minorities and homosexuals). Four of the five participating Latin American countries also participated in the previous cycle of this study (ICCS 2009), making it possible to explore changes in young people’s civic-related perceptions and attitudes between 2009 and 2016.

Data from the international part of the study (test and questionnaire) were used to review the extent to which region-specific perceptions relate to other factors such as students’ level of civic knowledge and students’ socioeconomic and educational contexts.