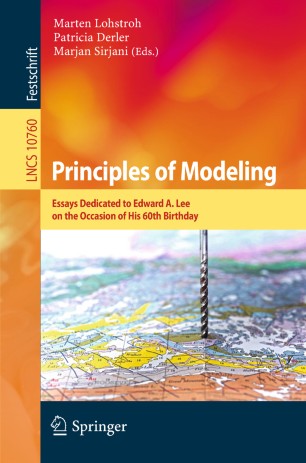 Essays Dedicated to Edward A. Lee on the Occasion of His 60th Birthday

This Festschrift is published in honor of Edward A. Lee, Robert S. Pepper Distinguished Professor Emeritus and Professor in the Graduate School in the Department of Electrical Engineering and Computer Sciences at the University of California, Berkeley, USA, on the occasion of his 60th birthday.

The title of this Festschrift is “Principles of Modeling" because Edward A. Lee has long been devoted to research that centers on the role of models in science and engineering. He has been examining the use and limitations of models, their formal properties, their role in cognition and interplay with creativity, and their ability to represent reality and physics.

The Festschrift contains 29 papers that feature the broad range of Edward A. Lee’s research topics; such as embedded systems; real-time computing; computer architecture; modeling and simulation, and systems design.