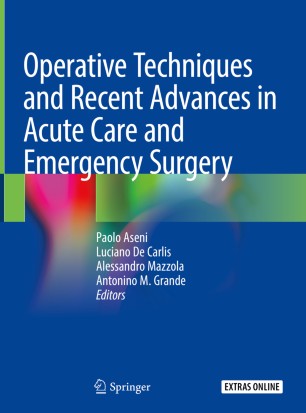 The aim of this book is to identify and shed new light on the main surgical practices involved in acute care and trauma surgery.  Adopting an evidence-based approach, a multidisciplinary team of surgeons and intensivists illustrate basic and advanced operative techniques, accompanied by a comprehensive and updated reference collection. Emerging surgical procedures in Acute Care Surgery are also explored step by step with the help of ample illustrations.

Further, the book offers an overview of treatment options for acute organ failure, with a focus on peculiar clinical situations that call for special treatment, including: extracorporeal membrane oxygenation (ECMO), circulatory support and urgent liver transplantation. In order to identify the key determinants in decision-making and therapeutic support that can help avoid critical errors, authors not only define and discuss specific surgical techniques, but also present major issues and controversies related to it.

In essence, the book can be considered a “What to do guide” that offers easy access to both basic and advanced lifesaving surgical procedures, due in part to text boxes highlighting “Tips, Tricks and Pitfalls” as well as advice on “Complications Management”. Many chapters are enriched by providing clinical case scenarios, an important educational resource including self–assessment questionnaires.

After graduating in Medicine at the University of Milan in 1975, Paolo Aseni trained in different centers in Germany and France: at the Medizinische Hochshule in Hannover and at the Zentrum für Experimentelle Medizin in München in 1978, then at the Hôpital Beaujon in Paris and at the Hôpital Paul Brousse in Villejuif. Since 1980, he has been working at the Department of Surgery and Transplant Center at the Niguarda Hospital in Milan, Italy, where he was mainly involved in abdominal organ transplantation and in emergency surgery. He is currently responsible for the basic surgical training of the emergency medical team in the Emergency Department at the same hospital. Since 1989, he has been also Assistant Professor for Anatomy and Human Macroscopic Morphology at the University of Medicine, Milan.

Luciano De Carlis obtained his degree in Milan in 1979 and trained as a visiting fellow at the Transplant Surgery Center in Pittsburgh (USA) in 1984, 1987, and again in 1988, studying particular aspects in the field of liver, kidney, pancreas, heart, and heart-lung transplantation.  He was also a visiting professor at the University of Tokyo in 2001. Prof. De Carlis has been working at the Niguarda Hospital in Milan, Italy since 1985, specializing in the field of renal, hepatic, and pancreatic transplantation. He is currently Professor of Surgery at the University of Milano-Bicocca School of Medicine, and Director of the Department of Surgery and Transplant Center at the Niguarda Hospital in Milan, where he introduced the first adult living donor liver transplantation program in Italy and, recently, the first Italian liver transplant program from “donation after cardiac death”.

Alessandro Mazzola received his degree in Medicine at the University“La Sapienza” of Rome in 1979. Since 1980 he has been working as attending surgeon in the Department of Cardiac Surgery of the “G. Mazzini Hospital” in Teramo, where from August 2002 to July 2012 he was Director of the Department. Since August 2012 he has been Director of the Department of Cardiac Surgery in Fondazione IRCCS Policlinico San Matteo of Pavia. His main clinical interests include valvular surgery, myocardial revascularization and aortic surgery (thoracic and thoraco-abdominal). He has been invited to give lectures on these topics and he was also Assistant Professor in Cardiac Surgery at the University of l’Aquila.

Antonino M. Grande obtained his degree in Medicine at the University of Pavia (Italy) in 1980. He then trained at the Department of Cardiovascular Surgery, Texas Heart Institute, Houston, Texas, USA, from 1982 to 1984 and then in Marseille (France). Since 1986, he has been working as an attending surgeon at the IRCCS Fondazione Policlinico San Matteo in Pavia, Italy, in the Cardiac Surgery – Heart and Lung Transplant Department. Dr. Grande has over 25 years of experience in cardiovascular postoperative intensive care; his main clinical interests include heart failure, heart/lung transplantations and mechanical circulatory support. Between 2000 and 2010, he was Assistant Professor for Surgical Anatomy at the University of Pavia.

“Senior trainees and providers are an appropriate audience. … This book is an effective combination of the evolution in European thinking with considered inclusion of the North American approach to trauma care. The scope is expansive and reference lists feature major contributions from both North America and Europe. … this book adequately presents the growing number of techniques and treatment strategies available to acute care surgeons.” (David J. Dries, Doody's Book Reviews, August 09, 2019)
Buy options