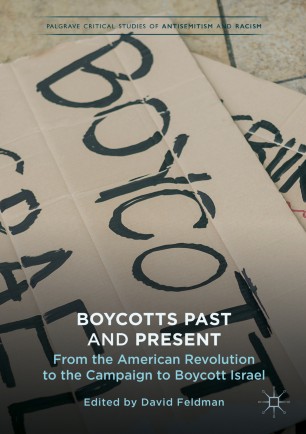 From the American Revolution to the Campaign to Boycott Israel

In this book historians and social scientists examine boycotts from the  eighteenth century to the present day. Employed in struggles against British rule in the American colonies, against racial discrimination in the United States during the Civil Rights movement, and Apartheid in South Africa, today it is Israel that is the focus of a campaign for Boycott, Divestment and Sanctions (BDS).
Boycotts have featured in campaigns undertaken by labour, consumer and nationalist movements. Jews were the target of boycotts advanced by various national movements in Central and Eastern Europe and the anti-Jewish boycotts instigated by the Nazis. In this collection, contributors explore the history of past boycott movements and examine the different narratives put forward by proponents and opponents of the current BDS movement directed against Israel: one which places the movement within a history of struggles for ‘human rights’; the other which regards BDS as the latest manifestation of an antisemitic tradition.