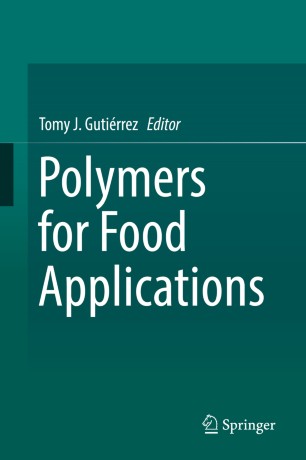 This book presents an exhaustive review on the use of polymers for food applications. Polymer-based systems for food applications such as: films, foams, nano- and micro-encapsulated, emulsions, hydrogels, prebiotics, 3D food printing, edible polymers for the development of foods for people with special feeding regimes, sensors, among others, have been analyzed in this work.

About the Editor:
Dr. Tomy J. Gutiérrez has a degree in chemistry (Geochemical option) from the Central University of Venezuela (UCV) (December, 2007), a degree in education (Chemical mention) from the same university (UCV, July, 2008), has a specialization in International Negotiation of Hydrocarbons from the National Polytechnic Experimental University of the National Armed Force (UNEFA) - Venezuela (July, 2011). He also has a Master's and PhD degree in Food Science and Technology obtained in October, 2013 and April, 2015, respectively, both from the UCV. It has also PhD studies in Metallurgy and Materials Science from the UCV and postdoctoral studies at the Research Institute in Materials Science and Technology (INTEMA). Dr. Gutiérrez has been a professor - researcher at the UCV both at the Institute of Food Science and Technology (ICTA) and the School of Pharmacy at the same university. It is currently an adjunct researcher in the INTEMA - National Scientific and Technical Research Council (CONICET), Argentina. Dr. Gutiérrez has at least 20 book chapters and 40 publications in international journals of high impact factor. Dr. Gutiérrez today is developing a line of research in nanostructured materials based on polymers (composite materials), which are obtained on a pilot scale to be transferred to the food, pharmaceutical and polymer industry. In addition, it is a collaborator of international projects between Argentina and France, Brazil, Venezuela and Colombia.