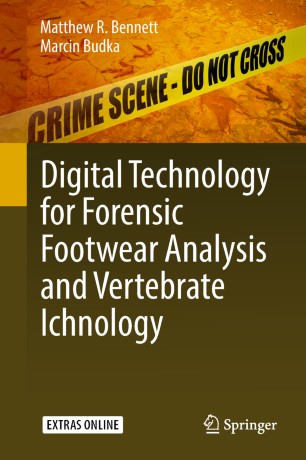 “There is no branch of detective science which is so important and so much neglected as the art of tracing footsteps.  Happily, I have always laid great stress upon it, and much practice has made it second nature to me.” Sherlock Holmes, Study of Scarlet.

Despite the fictional nature of Sherlock Holmes this statement rings true today.  The study of footwear is neglected in modern forensic practice and does have much to offer.  What it needs is an injection of technology and modern analytical tools.  These tools are emerging from the digital revolution currently transforming vertebrate ichnology.  Ichnology is the discipline of earth science which focuses on the study of trace fossils such as footprints.  This book draws upon both disciplines - geology (ichnology) and forensic science - to show how the two have much to learn from each other especially with regard to the digital capture and analysis of footprints.

This book presents field and laboratory methods associated with the collection, analysis and presentation of three-dimensional tracks (footprints) whether from a crime scene or a geological/archaeological excavation. It shows students, researchers and practitioners how to collect and analyse 3D data and take advantage of the digital revolution transforming ichnology.

This book is not only essential reading for forensic and earth science students but also for professional forensic practitioners as well as for applied computer scientists developing new tools for visualization and analysis of 3D data.  The book forms a natural methods focused complement to the successful text Fossilised Locomotion published by Springer 2014.

Professor Matthew Bennett's passion for geography and geology comes from a childhood spent in Snowdonia.  Born in Oldham (UK) Matthew has worked widely throughout the world on a range of geological projects. He completed his BSc in Physical Geography at Queen Mary College (University of London) in 1988 and went on to do a PhD in glacial geology in 1991 at Edinburgh University.  Taking up an appointment at the University of Greenwich in 1992 Matthew worked throughout the 1990s on a range of glacial and Quaternary research projects in the Arctic specifically in Norway, Svalbard, Iceland, Alaska and Canada, as well as throughout the UK. He published widely on aspects of glaciology, sedimentology and geomorphology.  In 2002 he joined Bournemouth University as Professor in Environmental and Geographical Sciences and started to work in Central America on various Quaternary and geo-archaeological projects.  In 2007 he was invited to join the Koobi Fora Field School organised at the time by Rutgers University and the National Museum of Kenya. His work on the Ileret footprints was published in Science in 2009. This human track site is the second oldest known human footprint site in the world and dates from 1.5 million years ago.   Since then, and working extensively throughout Africa, Matthew has published widely on ancient footprints developing new techniques and analytical procedures. In 2015, in conjunction with Professor Marcin Budka, Matthew was awarded an Innovation Grant by Natural Environment Research Council (NERC) to translate their footprint research in to a practical tool for use by forensic scientists. This project was supported by the UK Home Office and National Crime Agency. The result was the launch of DigTrace (Digital Tracks Capture and Analysis) an integrated freeware solution for the capture and analysis of footwear (& footprint) evidence in July 2016.

Professor Marcin Budka received his dual MSc/BSc degree in Finance and Banking from the Katowice University of Economics (Poland, 2003), BSc in Computer Science from the University of Silesia (Poland, 2005) and PhD in Computational Intelligence from Bournemouth University (UK, 2010). Between 2003 and 2007 he was working as an engineer, project manager and team leader in a smart-metering start-up company, before pursuing an academic career. In the years 2011-2012 he was appointed as a Visiting Research Fellow at the Wroclaw University of Technology, Poland. He currently acts as Head of Research in the Department of Computing and Informatics. Marcin is a data scientist with extensive industrial experience and his research interests lie in a broadly understood area of machine learning and data science, with a particular focus on practical applications. Throughout his career, he was involved in a number of research projects with industry, focussing on tangible impact and societally useful innovation. His adventure with ancient footprints started back in 2009, when he created a piece of software for processing three-dimensional data from tracks acquired using an optical laser scanner. The software was used extensively as part of UK’s Natural Environment Research Council (NERC) Grant and was instrumental in the preparation of multiple high-profile publications. Throughout the years the software has been refined and enhanced, by adding new functionality, eventually resulting in a proof-of-concept system for track alignment, which was central to another recently finished prestigious NERC Innovation award (2015). The aim of this award was to translate the academic research (and associated software) developed for fossil footprints to produce a tool of use to forensic science and the police in general. With his leadership of the software engineering team, the NERC award has delivered DigTrace (Digital Track Capture and Examination), an integrated software solution for the capture and analysis of 3D data in a forensic context (footwear evidence) or in the study of vertebrate tracks and footprints.