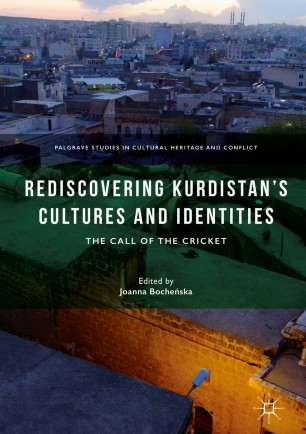 The Call of the Cricket

Rediscovering Kurdistan’s Cultures and Identities: The Call of the Cricket offers insight into little-known aspects of the social and cultural activity and changes taking place in different parts of Kurdistan (Turkey, Iraq, Syria and Iran), linking different theoretical approaches within a postcolonial perspective. The first chapter presents the book’s approach to postcolonial theory and gives a brief introduction to the historical context of Kurdistan. The second, third and fourth chapters focus on the Kurdish context, examining ethical changes as revealed in Kurdish literary and cinema narratives, the socio-political role of the Kurdish cultural institutions and the practices of countering othering of Kurdish migrants living in Istanbul. The fifth chapter offers an analysis of the nineteenth-century missionary translations of the Bible into the Kurdish language. The sixth chapter examines the formation of Chaldo-Assyrian identity in the context of relations with the Kurds after the overthrow of the Ba’ath regime in 2003. The last chapter investigates the question of the Yezidis’ identity, based on Yezidi oral works and statements about their self-identification.

Joanna Bocheńska is Assistant Professor at the Institute of Oriental Studies and Director of the Section of Kurdish Studies at the Jagiellonian University, Poland. From 2013 to 2018, she headed the research project, How to make a voice audible? Continuity and change of Kurdish culture and social reality in postcolonial perspectives (www.kurdishstudies.pl). Her main interests include ethics, Kurdish classical and modern literature, Middle Eastern cinema and art. She is also a translator of Kurdish literature and a photographer (www.joannabochenska.com).