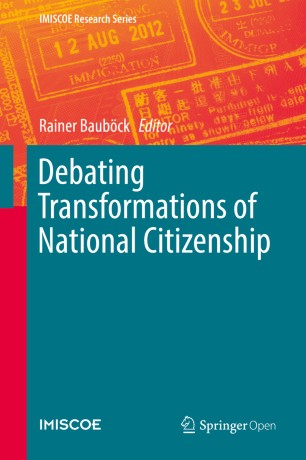 This open access book discusses how national citizenship is being transformed by economic, social and political change. It focuses on the emergence of global markets where citizenship is for sale and on how new reproduction technologies impact citizenship by descent.  It also discusses the return of banishment through denationalisation of terrorist suspects, and the impact of digital technologies, such as blockchain, on the future of democratic citizenship. The book provides a wide range of views on these issues from legal scholars, political scientists, and political practitioners. It is structured as a series of four conversations in which authors respond to each other. This exchange of arguments provides unique depth to current debates about the future of citizenship.

Rainer Bauböck holds a chair in social and political theory at the Department of Political and Social Sciences of the European University Institute. His research interests are in normative political theory and comparative research on democratic citizenship, European integration, migration, nationalism and minority rights. Together with Jo Shaw (University of Edinburgh) and Maarten Vink (University of Maastricht), he coordinates GLOBALCIT, an online observatory on citizenship and voting rights.