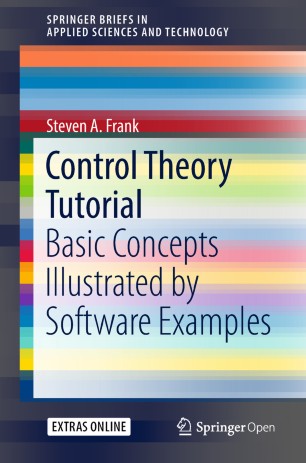 This open access brief introduces the basic principles of control theory in a concise self-study guide. It complements the classic texts by emphasizing the simple conceptual unity of the subject. A novice can quickly see how and why the different parts fit together. The concepts build slowly and naturally one after another, until the reader soon has a view of the whole. Each concept is illustrated by detailed examples and graphics. The full software code for each example is available, providing the basis for experimenting with various assumptions, learning how to write programs for control analysis, and setting the stage for future research projects. The topics focus on robustness, design trade-offs, and optimality. Most of the book develops classical linear theory. The last part of the book considers robustness with respect to nonlinearity and explicitly nonlinear extensions, as well as advanced topics such as adaptive control and model predictive control. New students, as well as scientists from other backgrounds who want a concise and easy-to-grasp coverage of control theory, will benefit from the emphasis on concepts and broad understanding of the various approaches.

​Steven A. Frank is Donald Bren Professor of Biological Sciences at the University of California, Irvine. Professor Frank develops theory on the evolutionary design of organisms and the failure of those designs in disease. His works include three monographs published by Princeton University Press: Dynamics of Cancer, Immunology and Evolution of Infectious Disease, and Foundations of Social Evolution. He has also published a series of seven articles on the advanced theory of natural selection, along with approximately another 150 peer-reviewed journal articles. His interest in engineering arises from studying the similarities and differences between human-engineered machines and naturally evolved organisms, a contrast that clarifies many aspects of design tradeoffs at the core of both engineering and biology. Professor Frank has received widespread recognition for his research, including election to the American Academy of Arts and Sciences and the Theodosius Dobzhansky Prize awarded by the Society for the Study of Evolution.

“This book outlines some basic concepts, models, problems and possible solutions related to systems and control theory, both classical and advanced. It provides a dozen numerical examples and graphical illustrations in a fairly intuitive and straightforward fashion. … this is really an excellent tutorial for students and engineers who are majoring in disciplines other than control theory and engineering.” (Jun Zhou, Mathematical Reviews, February, 2019)
PDF
EPUB