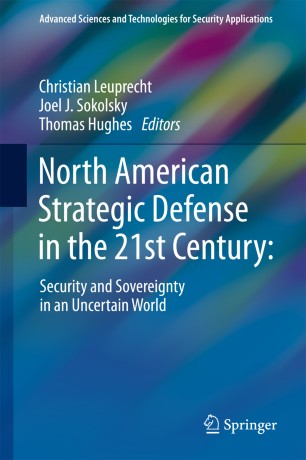 Security and Sovereignty in an Uncertain World

The protection of the homeland is the top priority for U.S. national security strategy. Strategic defense, however, has been an overlooked dimension in the vast literature on the U.S. strategic posture, with even less attention given to the necessity and dynamics of security collaboration within North America. Drawing on the expertise of scholars from the U.S., Canada and Mexico, the book offers a wide range of perspectives on recent trends in, and future prospects for, the military and political evolution of North American strategic defense.

North American strategic defense is a topic too often taken for granted: as this excellent book shows, that is a mistake. In the 21st century, perhaps even more than the 20th, it will be an issue of cardinal importance to both the United States and Canada.
Eliot A. Cohen
Robert E. Osgood Professor of Strategic Studies, Johns Hopkins School of Advanced International Studies

NORAD’s binational command is unique, and this timely and ambitious book examines its continued relevance to North American defense against a host of new global threats. It broadensthe focus of what we mean by North American defense, contemplates how we might include Mexico in various regional security arrangements, and considers the dynamics of expanded North American interdependence in the Trump era.
Laura Dawson
Director of the Canada Institute, Woodrow Wilson International Center for Scholars

North American Strategic Defense in the 21st Century is an important book. This edited volume brings together a galaxy of stars, both rising and established, with outstanding credentials regarding NORAD and associated matter in the study of security. This original and well-written volume is the first of its kind since the Cold War – long overdue and impressive in contents. The chapters cover both panoramic issues and more specific matters, and the collection is essential reading for academics, policy-makers and the general public.
Patrick James
Dornsife Dean’s Professor, School of International Relations, University of Southern California

Prof. Christian Leuprecht (Ph.D, Queen’s) is Class of 1965 Professor in Leadership the Royal Military College of Canada and Matthew Flinders at Flinders University in South Australia. He is a recipient of RMC’s Cowan Prize for Excellence in Research and elected a member of the College of New Scholars of the Royal Society of Canada. He holds a Governor-in-Council appointment to the governing Council of the Natural Sciences and Engineering Research Council of Canada and is president of the International Sociological Association’s Research Committee 01: Armed Forces and Conflict Resolution. He is Munk Senior Fellow at the Macdonald Laurier Institute and cross-appointed to the Department of Political Studies and the School of Policy Studies at Queen’s University.  He has held the Bicentennial Visiting Professorship in Canadian Studies at Yale University and a senior fellowhip at the Hanse Wissenschaftskolleg Institute for Advanced Study. An expert on comparative study of security and defence, political demography, and federalism and multilevel governance, he is regularly called as an expert witness to testify before committees of Parliament.

Dr. Joel J. Sokolsky is a Professor of Political Science at the Royal Military College of Canada. He holds a PhD in Political Science from Harvard University and an MA from the School of Advanced International Studies (SAIS), Johns Hopkins He is a Senior Fellow at the Queen’s University Centre for International and Defence Policy and holds an appointment with the Queen’s Department of Political Studies. He is a Research Affiliate at the Strategic Studies Program of the Massachusetts Institute of Technology and Senior Analyst with Wikistrat.com. He has been the recipient of several scholarships and awards including, two Fulbright Scholarships, two NATO Fellowships and a Killam Fellowship. Dr. Sokolsky works on issues concerning American and Canadian foreign and defense policy, civil-military relations and modern naval strategy.

Thomas Hughes is a PhD candidate in the Political Studies programme at Queen’s University, with International Relations as a primary field. Having graduated with an MA in International Security from the Josef Korbel School of International Studies, Thomas specialises in coercive diplomacy and the use of force short of war. He has particular expertise in air power and weapons technology, notably Remotely Piloted Aircraft and cyber security.

“After reading the book, one will be impressed with how the editors have connected each of the chapters within a section and how each section exposes the readers to the key issues of the day and the challenges that Canada faces in making decisions on some of these important security files. … Anyone interested in North American security and our relationship with the US should read this book.” (J. Craig Stone, CDA Institute, dcainstitute.ca, November, 2018)​
Buy options