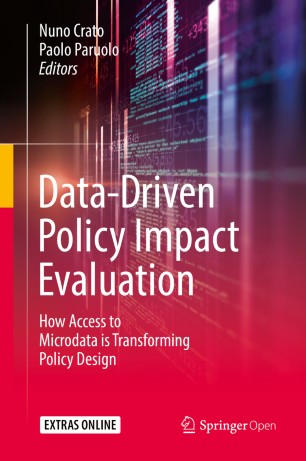 In the light of better and more detailed administrative databases, this open access book provides statistical tools for evaluating the effects of public policies advocated by governments and public institutions. Experts from academia, national statistics offices and various research centers present modern econometric methods for an efficient data-driven policy evaluation and monitoring, assess the causal effects of policy measures and report on best practices of successful data management and usage. Topics include data confidentiality, data linkage, and national practices in policy areas such as public health, education and employment. It offers scholars as well as practitioners from public administrations, consultancy firms and nongovernmental organizations insights into counterfactual impact evaluation methods and the potential of data-based policy and program evaluation.

Nuno Crato studied economics at Lisbon Technical University and worked as a quantitative consultant for project evaluation and management, Nuno Crato graduated with a Ph.D. in Applied Mathematics from the University of Delaware and worked in the U.S. for many years as a college professor and researcher. Now a Professor of Mathematics and Statistics at the University of Lisbon, he has published extensively in the fields of time series analysis, econometrics and applied probability models.
He served as dean of the Technical University of Lisbon and as President of Taguspark, the largest science and Technology Park in Portugal. An active science writer, he wrote more than a dozen books, some published in the U.K., U.S., Portugal, Brazil, and Italy, receiving a prize from the European Mathematical Society in 2003 and a Science award from the European Union in 2008. From 2011 to 2015 he was the Portuguese Minister of Education and Science. He has continually pledged for data availability and data-based policy evaluation. He works now at the Joint Research Center as a senior grantholder scientist.
Paolo Paruolo is an econometrician with interest in theoretical and applied econometrics and in counterfactual methods. He has a Master in Economics and Statistics from the University of Bologna (1987) and a PhD in Mathematical Statistics (Theoretical Econometrics) from the University of Copenhagen (1995). He was Assistant and Associate Professor of Econometrics at the University of Bologna between 1989 and 1999, and Full Professor of Econometrics at the University of Insubria (Varese) between 1999 and 2013.
Since 2013 he is a Researcher at the JRC, in Ispra, Varese, Italy. He is presently the Coordinator of the Competence Centre on Microeconomic Evaluation (CC-ME), which includes the Centre for Research on Impact Evaluation (CRIE) at the JRC. For his publication record, he was ranked among the best 150 econometricians worldwide in Baltagi (2007) "Worldwide econometrics rankings: 1989-2005", Econometric Theory 23, p. 952-1012.

“This book, edited by Nuno Crato and Paolo Paruolo, provides a thorough analysis of evaluation studies and is a valuable contribution for a reader seeking to gain an understanding of the literature on microdata issues and the use of the results related to policy evaluation. … the book could be very useful to scholars interested in regional development and regional policy effectiveness given the topics and the discussions included.” (Roberto Gabriele, Regional Studies, Vol. 53 (6), 2019)
PDF
EPUB