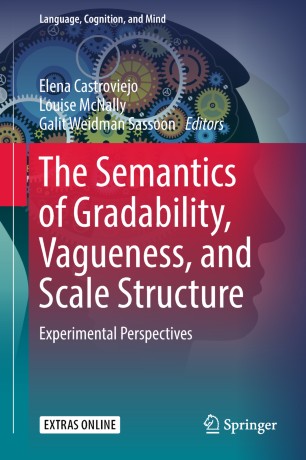 The Semantics of Gradability, Vagueness, and Scale Structure

This volume is the first to focus specifically on experimental studies of the semantics of gradability, scale structure and vagueness. It presents support for and challenges to current formal analyses of these phenomena in view of experimentally collected data, highlighting the ways semantic and pragmatic theory can benefit from experimental methodologies. The papers in the volume contribute to an explicit and detailed account of the use, representation, and online processing of gradable and vague expressions using various kinds of controlled speaker judgment tasks, eye tracking, and ERP. The aim is to strengthen the foundations of experimental semantics and promote interaction between linguists, psycholinguists, psychologists, and philosophers who are interested in the semantics of natural language. Using data representing different languages and a variety of nominal and adjectival constructions, including degree modification and comparatives, the contributions address scale-based classifications of gradable predicates, such as the absolute vs. relative distinction; the nature of the standards for applicability of gradable expressions and the ways in which standards are determined; the nature of dimensions and multidimensionality in the meaning of scalar expressions; and the role of embodiment, subjectivity, and sociolinguistic considerations in the use and understanding of gradable expressions.