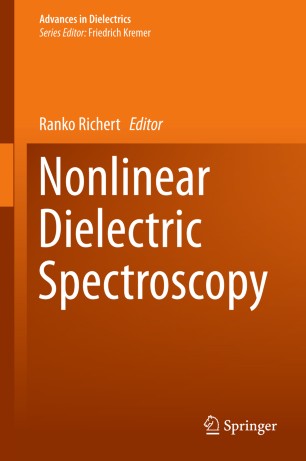 Part of the Advances in Dielectrics book series (ADVDIELECT)

The book explains that nonlinear dielectric spectroscopy can be used as a tool to measure structural recovery or physical aging, as well as connections between dynamics and thermodynamic variables such as enthalpy and entropy. Supercooled liquids in their viscous regime are ideal candidates for investigating nonlinear effects, because they are particularly sensitive to changes in temperature, and thus also to changes in the electric field. Other interesting materials covered are plastic crystals and complex liquids near criticality. The book also points out that, compared with other techniques such as mechanical shear experiments, the nonlinear regime of dielectric spectroscopy is special in the sense that the energies involved always remain small compared with thermal energies. To demonstrate this, nonlinear features of mechanical experiments are discussed. Theoretical approaches to nonlinear effects are particularly complicated because the tools available for the linear regime no longer apply. As a result, there is no single generally accepted theory to nonlinear dielectric responses of real liquids. Various approaches to nonlinear dielectric features have been reported, and the different aspects are communicated in several chapters. The book communicates recent progress most effectively through individual contributions from specialists in their respective fields.