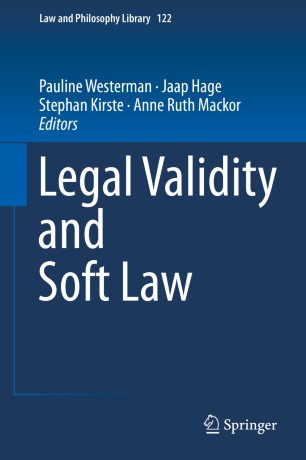 This book features essays that investigate the nature of legal validity from the point of view of different traditions and disciplines. Validity is a fascinating and elusive characteristic of law that in itself deserves to be explored, but further investigation is made more acute and necessary by the production, nowadays, of soft law products of regulation, such as declarations, self-regulatory codes, and standardization norms. These types of rules may not exhibit the characteristics of formal law, and may lack full formal validity but yet may have a very real impact on people's lives. The essays focus on the structural properties of hard and soft legal phenomena and the basis of their validity. Some propose to redefine validity: to allow for multiple concepts instead of one and/or to allow for a gradual concept of validity. Others seek to analyze the new situation by linking it to familiar historical debates and well-established theories of law. In addition, coverage looks at the functions of validity itself. The discussion considers both international law as well as domestic law arrangements. What does it mean to say that something is valid? Should we discard validity as the determining aspect of law? If so, what does this mean for our concept of law? Should we differentiate between kinds of validity? Or, can we say that rules can be "more" or "less" valid? After reading this book, practitioners, scholars and students will have a nuanced understanding of these questions and more.

Jaap Hage  studied Law and Philosophy at Leiden University. After working as an assistant professor at the Faculty of Law in Leiden, he became associate professor and in 2011 full professor of Jurisprudence at the University of Maastricht. His research interests include legal logic, basic legal concepts, methodology of legal science, and neurolaw. His main publications include the monographs ‘Reasoning with Rules’ and ‘Studies in Legal Logic’, and as co-editor the edited volumes ‘Concepts in Law’ and ‘An Introduction to Law’.

Stephan Kirste studied law, history and philosophy and finished his juridical doctor with summa cum laude at the University of Freiburg (Germany) with a dissertation on time and law and his habilitation at the University of Heidelberg (Germany) with a book on public administrative law, receiving a venia legend for public law, philosophy of law, sociology of law and history of constitutional law. He became Professor of Law at the University of Heidelberg in 2006 (Extra-Ordinarius) and received a chair for for European Public Law and Legal Philosophy at the German Speaking Andrassy University Budapest in 2008, where he was Dean of the Faculty for Comparative Legal and State Sciences until his call to Salzburg in 2012. Since 2010 he is president of the German Section of the International Association for Legal and Social Philosophy (IVR). His fields of interest concern in particular: Theory of jurisprudence (esp. interdisciplinary of the science of law); Theory of law (esp. law and time); ethics of law (esp. human rights, human dignity, justice); Comparative constitutional law (esp. Brazil, USA); history of legal thought.

Anne Ruth Mackor studied law and philosophy in Leiden and Groningen and obtained her PhD in 1997 (Meaningful and Rule-guided Behavior: a Naturalistic Approach). From 2004 until 2014 she was Socrates professor of Professional Ethics at the Faculties of Philosophy and Theology, University of Groningen and from 2010 until present she is professor of Professional Ethics, especially of Legal Professions at the Faculty of Law, University of Groningen. Among others she has written about soft law, more in particular about the validity of judicial codes of conduct. In 2015 she was the external advisor both of the Judiciary and the Public Prosecution of Surinam for their Code of Conduct.

Pauline Westerman obtained her PhD in 1997 cum laude on The Disintegration of Natural Law Theory: From Aquinas to Finnis, (Brill Leiden, 1998); later awarded a Praemium Erasmianum). Appointed in 2001 Professor Philosophy of Law, University of Groningen and (until 2009) Free University Amsterdam. Since 2007 attached to the Academy for Legislation, in The Hague as Program-Manager Research. From 2009 General Editor of Legisprudence, International Journal for the Study of Legislation, Hart Publishing, Oxford, currently called Theory and Practice of Legislation (Taylor and Frances). In 2010 she was elected as member of the Royal Dutch Academy of Sciences, section Law. In 2018 her book Outsourcing the Law: a Philosophical Perspective on Regulation was published (Elgar).