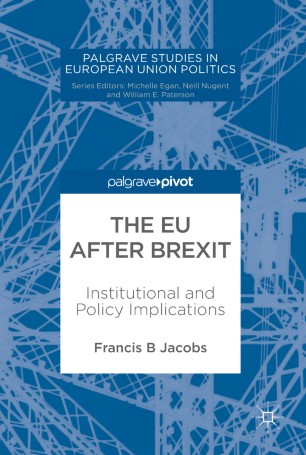 The EU after Brexit

Much attention has been paid to the ongoing and unpredictable Brexit negotiations between the EU and the UK, but much less on what the absence of the UK might entail for the remaining 27 EU Member States. This book explores the range of implications for the EU after Brexit, and whether it is likely to become stronger or weaker as a result. It reviews the different attitudes on the EU’s future within both the member states and the individual EU institutions, and examines the impacts of Brexit on the composition of the EU institutions and on the balance of power between the member states. It also looks at linguistic and cultural impacts, the UK’s wider legacy for the EU and possible changes in EU priorities. The author concludes that Brexit has reinforced the EU’s unity in the short term, but that the EU will have to confront a number of key challenges if it is to be reinforced in the longer term. This book will appeal to practitioners, scholars and students interested in EU politics and integration in general, and Brexit in particular.

Francis Brendan Jacobs is Adjunct Senior Research Fellow at University College Dublin, Ireland. He worked for the European Parliament from 1979 until 2016 and is the co-author of The European Parliament (9th edition, 2016), as well as being the editor and principal compiler of the reference work Western European Political Parties (1989). He is a frequent lecturer on EU matters, and has written many other articles and chapters in books.